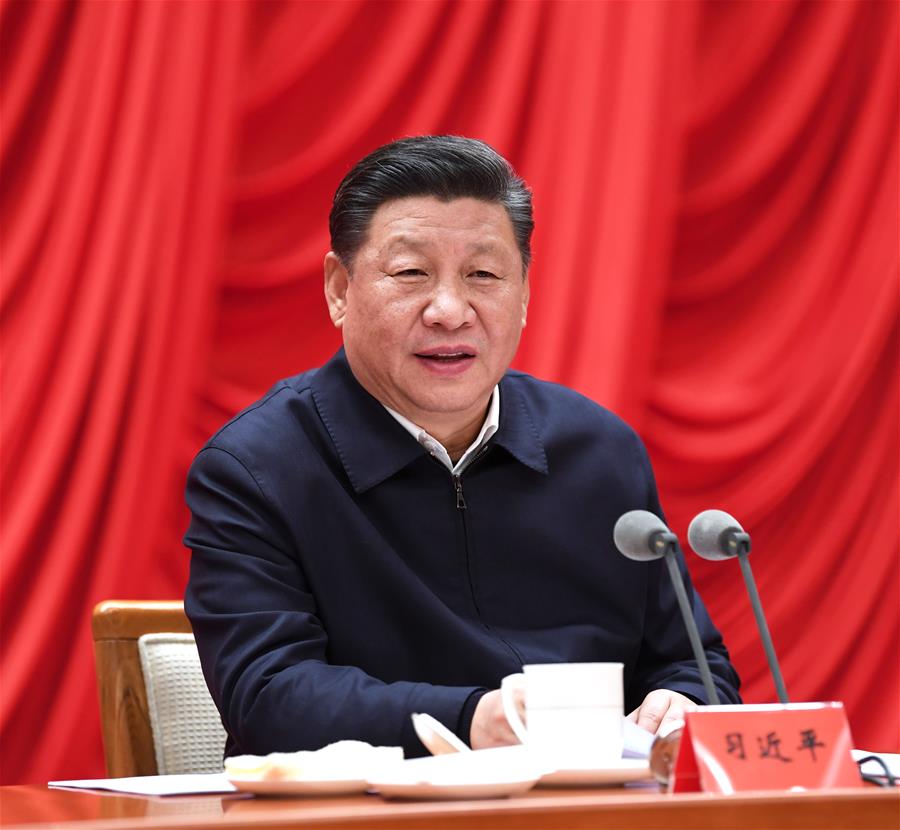 Chinese President Xi Jinping, also general secretary of the Communist Party of China (CPC) Central Committee and chairman of the Central Military Commission, addresses the opening ceremony of a study session at the Party School of the CPC Central Committee attended by senior provincial and ministerial officials in Beijing, capital of China, on Jan. 21, 2019.  (Photo: Xinhua)

Xi, also general secretary of the Communist Party of China (CPC) Central Committee and chairman of the Central Military Commission, made the remarks when addressing the opening ceremony of a study session at the Party School of the CPC Central Committee attended by senior provincial and ministerial officials.

In his speech, Xi analyzed and raised specific requirements on the prevention and defusion of major risks in areas including politics, ideology, economy, science and technology, society, the external environment and Party building.

Xi urged Party committees and governments at all levels to pursue a holistic approach to national security and follow the requirements of the CPC Central Committee to ensure China's political security.

He called for continuous efforts to strengthen the influence of the mainstream tone in public communication and guidance on public opinion, and accelerate the establishment of a system for integrated internet management to promote a law-based cyberspace.

Priority should be given to strengthening the ideological and political education among the young, building up their full confidence in the path, theory, system, and culture of socialism with Chinese characteristics so as to nurture a generation of capable young people who are well-prepared to join the socialist cause, Xi said.

China's economy is generally in good shape while facing profound and complicated international and domestic changes, Xi said, adding that it is inevitable to come across challenges in pushing ahead with supply-side structural reform.

Noting the new and worrisome developments amid generally steady economic operation, Xi called for maintaining strategic resolve by advancing growth in the right direction while being ever ready to determine and deal with potential major economic risks.

Efforts should be made to balance stabilizing growth and guarding against risks, Xi stressed.

It is necessary to introduce a long-term mechanism to maintain the sound development of the real estate market in a steady manner, he said.

Market sentiment analysis should be strengthened, evaluations should be made for impact of new policies on the financial markets, public expectations should be better guided, and market monitoring and regulation coordination should be enhanced to address risks timely, he said.

Xi called for concrete measures to make financing for medium-sized, small and micro firms easier and affordable, and to stabilize and support employment.

Great efforts are needed to deal with challenges facing the disposal of "zombie enterprises" to speed up the clearing up and unleash untapped resources, he said.

Xi stressed security in the field of science and technology, noting that the overall efficiency of the innovation system should be improved.

He called for efforts to build up the strengths of the system and mechanism for independent innovation, accelerate the establishment of national laboratories, restructure national key laboratory system and set up major innovation bases and platforms.

He noted that efforts should be made to accelerate establishing an early warning and monitoring system to ensure scientific and technological security, as well as to promote the legislation work concerning artificial intelligence, gene editing, medical diagnosis, autopilot, drones and service robots.

To maintain social stability, more efforts should be made in areas including employment, education, social security, medicine and health care, food security, workplace safety, public security and the macro-regulation of the housing market, to continuously enhance people's sense of fulfillment, happiness and security, Xi said.

He called for strong and swift action in both protecting people's rights and busting illegal and criminal activities, and said that preventing and cracking down on crime should be coordinated with measures to reduce risks and maintain stability when dealing with economic cases involving large numbers of victims.

"Battles against gang crimes must go on," Xi said, asking for the innovation and improvement of the crime prevention and control system to keep a strong deterrence against criminal acts.

He also called for an advance in the modernization of social governance, so the capability and quality to maintaining social stability at the roots could be enhanced.

Xi said it was imperative to reinforce the protection of the country's overseas interests and ensure the safety of major overseas projects, personnel and organizations.

Calling for efforts to jointly build and improve a security guarantee system for the Belt and Road Initiative, Xi stressed the need to safeguard sovereignty, security and development interests, as well as to create a sound external environment for China's reform, development and stability.

Hailing marked progress in exercising strict governance over the Party since the 18th CPC National Congress, Xi warned against the long-term and complex nature of the tests confronting the Party as they relate to long-term governance, reform and opening up, the market economy, and the external environment.

The Party must fully recognize the intensity and severity of the dangers of a lack of drive, incompetence, disengagement from the people, inaction, and corruption, he said.

The whole Party must closely follow the Central Committee in terms of their thinking, political orientation and actions, Xi demanded.

"We have secured a sweeping victory in the fight against corruption since the 18th CPC National Congress, but the fight has not been thoroughly won," he said, noting that tough and prolonged steps must be taken in the anti-graft drive.

Xi stressed that preventing and resolving major risks is the political responsibility of Party committees, governments and leading officials at various levels.

"It entails an energetic and tenacious spirit of struggle to guard against and defuse major risks," he said, urging leading officials to "dare to take on responsibilities and struggle."

Presiding over the opening ceremony, Li Keqiang called for in-depth study of the spirit of Xi's speech, better understanding of the importance and urgency of preventing and defusing major risks.

Senior officials were also urged to develop unshakable confidence, shoulder duties and responsibilities and do a good job in the initiative.