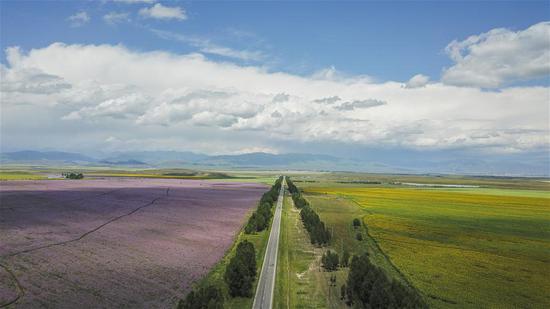 Under the scorching sun, a crane loads containers of car parts, small commodities, and clothing onto a train.

The train, stopping at the freight train logistics center in Urumqi, capital of northwest China's Xinjiang Uygur Autonomous Region, will carry the cargo to Moscow in a week.

It is the 1,448th freight train heading to Europe from the center.

2018 marks the fifth anniversary of the Belt and Road Initiative launched by China.

This year alone, the center has handled 603 trains to Europe, accounting for 85 percent of last year's total. The number is expected to reach 1,400 by the end of 2018.

While more and more freight trains have connected Chinese and European cities, Xinjiang has turned from a remote border region into a forefront for international logistics services.

When the operation of the train logistics center started in May 2016, only four international lines were available, with trains operating once per week.

Up to 3,600 tonnes of cargo are handled every day, making Urumqi one of the largest logistics centers among the countries along the Belt and Road.

"Everyone in the center works hard to help the center run smoothly," Nan said.

The center has cooperated with customs and inspection authorities to optimize the handling procedures, including customs clearance.

Benefiting from the optimization and improved schedule arrangement, the transportation time of China-Europe freight trains departing from the center has been cut from 22 days to 15 days, and that of the routes between China and Central Asia from 66 hours to 44 hours, said Nan.

The center holds monthly meetings with the railway transportation of Kazakhstan for coordination, he added.

Cooperating with more than 200 companies, the center has built a platform of logistics where over 200 commodities ranging from garments to electronic components are transported among the countries along the Belt and Road.

"The Belt and Road Initiative has transformed Xinjiang into a gate that opens to the west," said Nan.