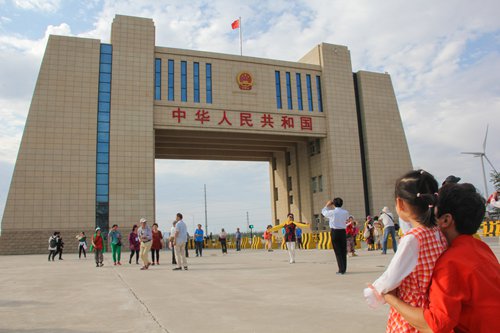 As a western gate for China on the Belt and Road, Alashankou draws on its strength to boost the initiative and drive the development of other parts in Xinjiang.

Alashankou, also known as Alataw Pass, is the largest entrepôt in northwestern China, located in Bortala Mongolian Prefecture of Xinjiang. It saw a steep increase in the number of China-Europe freight trains and freight volume in the first seven months of 2018, according to local authorities.

From January to July this year, 1,328 China-Europe freight trains passed through Alashankou, carrying 577,600 tons of goods, according to Alashankou customs, people.cn reported.

To increase efficiency, around 63 percent of the trains passed through at night time. In this way, the time to pass customs has been reduced from more than 23 hours to less than 15 hours.

About 70 percent of China-Europe trains pass through Alashankou before arriving in 36 cities of 13 European countries through 10 routes.

Zhu Chao, a trade official in Alashankou, told the Global Times that in 2017, a total of 1,755 China-Europe freight trains passed through the city, a 75.4 percent year-on-year increase, carrying 894,800 tons of goods.

Alashankou is at the middle point of the Second Eurasian Continental Bridge, a railway that passes more than 40 countries with Rotterdam, the Netherlands and Lianyungang, East China's Jiangsu Province on either end. The route crosses countries with a combined population of 2.2 billion.

The line goes through major cities in China. A train from Southwest China's Chongqing Municipality to Duisburg of Germany takes two weeks.

Zhu said that Alashankou has a proud record of efficiency in customs clearance services, nearly two hours faster than the average time national-wide, thanks to its advanced facilities and workers' experience.

This line is also the shortest way to Europe among all the China-European railways, Zhu noted. "It has great potential."

More than an entrepôt

The Alashankou Integrated Free Trade Zone was approved in May 2011 by the State Council. It is the first of its kind in Xinjiang, and the 16th across China.

The zone has been taking advantages of policies and its location to promote the development of production and processing in the area.

By the end of 2017, 20 billion yuan ($2.92 billion) was invested into the Alashankou Integrated Free Trade Zone, Zhang told the Global Times.

The region attracted 465 companies by 2017, generating an income of 44 million yuan, he said.

Leo Zheng, a manager of the SF Express subsidiary, told the Global Times that the company receives goods by train from different areas of China or Europe at Alashankou, and sends the goods to different destinations.

Chemical materials, electronic devices, tomato sauce and textiles are the main products the company exports from China for now, while clothes, raw materials and luxuries are being imported.

The company aims to operate 100 trains between China and Europe in 2018, delivering 100,000 tons of goods, according to Zheng.

Meanwhile, the Aiju Qinjiang food company from Xi'an, Northwest China's Shaanxi Province, has been producing flour and oil in its newly opened factory in the Alashankou Integrated Free Trade Zone since 2017.

The company processes wheat and sunflowers imported from Kazakhstan in Alashankou, and sells the products in supermarkets back in Shaanxi, Li Ping, an office chief of the company, told the Global Times.

"The transportation cost is much lower than processing in Xi'an. Also, the Kazakh products have a better taste and are more organic," Li said.

The company has invested 80 million yuan in building factories and storage facilities in Alashankou, and will pay 140 million yuan for more storage and production lines, Li said.

Alashankou has also been using its advantage to lead the development of other regions in Xinjiang.

The Integrated Free Trade Zone is making a contribution to regional stability by creating a large number of jobs, which is considered part of targeted poverty relief.

The zone has attracted more than 1,800 workers from all around Xinjiang. At the end of 2018, there will be more than 3,000, including many ethnic minorities, according to Zhang.

For example, Alashankou has accepted 300 Uyghur workers from Pishan and Shache counties in southern Xinjiang.

"Xinjiang's efforts in maintaining stability aim to make an environment for economic development and people's peaceful life," Zhang noted. "The benefits of stability will bloom within five years."

Zhang said that to make the Belt and Road initiative more energetic, people-to-people communication is a key.

"Therefore, we are studying how to upgrade Alashankou into a free trade region in order to clear up barriers to people's communication and promote development all along the railway," he said.

Zhang said that Xinjiang needs more medium- and high-end talent who can practically understand and apply the policies.