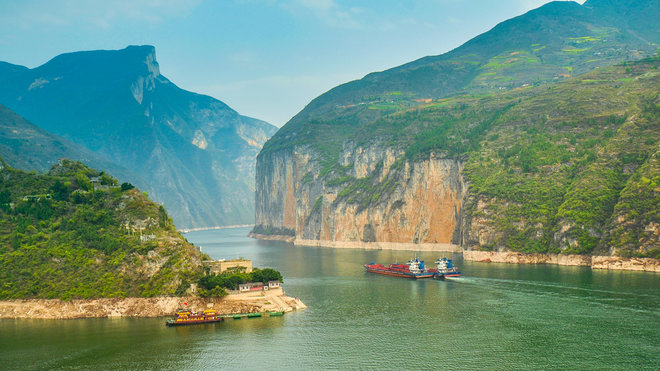 The Yangluo port on the Yangtze River in central China's Hubei Province will be expanded to serve regional economic development and Belt and Road Initiative, sources have said.

Plans on the second phase and third phase expansion projects passed expert appraisal in Wuhan, capital of Hubei, Friday. The first phase project went into operation at the end of last year.

The Yangluo port is an important port in middle reaches of the Yangtze River, China's longest waterway. The expansion project will connect Yangluo port with Wujiashan rail terminal in the city, about 60 kilometers away.

After the expansion, logistic costs of transferring cargoes that arrive through waterway to railroads will be greatly reduced, said Zhang Lin, director of Wuhan New Port Management Committee, which manages the Yangluo port.

Currently, Yangluo port could only handle 100,000 containers every year through the waterway-rail logistic model, and the figure will be raised to 2.1 million in the future, Zhang said.

A docking yard for Baowu Steel in Jangbei district will be renovated, and a large enterprise will be moved away from the bank to create space for port facilities, Zhang said.

The expansion will make Wuhan the biggest waterway-rail hub in China's inland area.

"This is an important step to carry out the national strategy of Yangtze River Economic Belt, and serve the Belt and Road Initiative," Zhang said.

Wujiashan Terminal is the starting point for Wuhan-Europe rail freight services. Starting from 2012, 16 rail routes to European cities are in operation, including to Pardubice in the Czech Republic, Gorzow in Poland, Moscow in Russia, Hamburg and Duisburg in Germany, and Lyon in France.