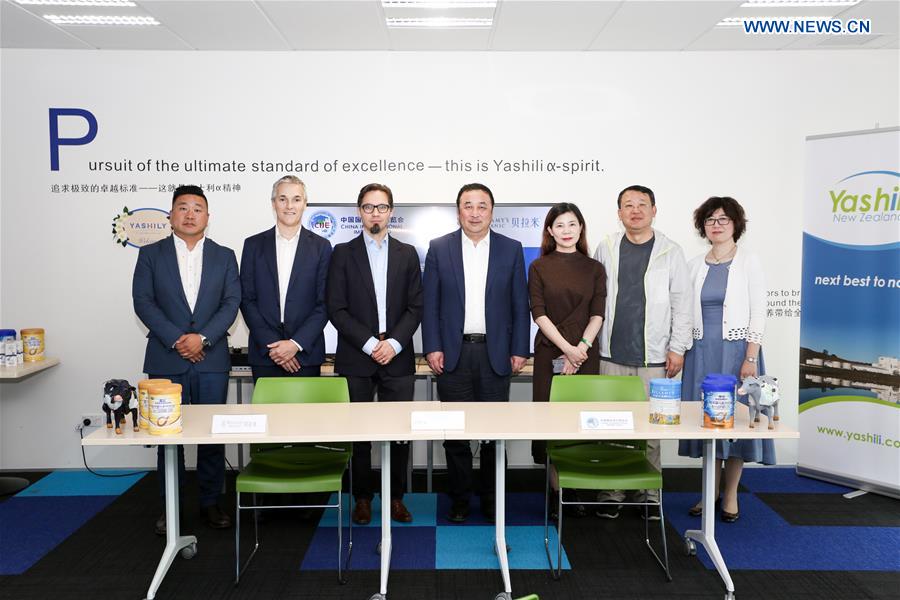 Sun Chenghai (C), vice-director of the China International Import Expo (CIIE) Bureau, poses for a photo with representatives of Yashily and Bellamy's after a signing ceremony in Pokeno, New Zealand, on Dec 8, 2019.  (Photo: Xinhua)

POKENO, New Zealand - Yashily and Bellamy's signed contracts with the China International Import Expo (CIIE) Bureau here on Sunday in Pokeno, a small town to the south of Auckland in New Zealand.

They became the first batch of dairy companies from New Zealand and Australia that received the admission tickets to the 3rd CIIE.

While the delegation from China International Import Expo Bureau was visiting Yashily's factory in Pokeno, south of Auckland, New Zealand, Bellamy's board passed the Mengniu acquisition proposal. Bellamy's will appear at the CIIE 2020 as a new member of the Mengniu family.

According to Australian Financial Review, both the Foreign Investment Review Board (FIRB) of Australia and Bellamy's board members had unanimously given Mengniu a green light to bid Bellamy's in the past three weeks.

"The rest is simply procedures need to be done by the local court. Should be finished by the end of this month," Peter Fridell told Xinhua during the sign ceremony at Pokeno with Mengniu's delegation.

Pin Zhang, President and Executive Director of Yashily International, underlined that Yashily is dedicated to building world-class milk sources. Platforms such as the CIIE has enabled Yashily to provide products produced in New Zealand factory back to the Chinese babies.

Jeffrey Lu, CEO of Mengniu Group, noted the dairy industry overseas, especially in the countries along the Belt and Road initiative, are complementary to each other and share common interests.

It is essential that dairy player globally share interests across the "grass to glass" value chain. Through the establishment of a "Global Dairy Community," the global dairy industry could achieve co-governance, mutual benefits, inclusiveness, and most importantly, sustainable development.