Zimbabwean President Emmerson Mnangagwa on Wednesday toured the site of the new parliament building that is being constructed by China"s Shanghai Construction Group (SCG), and expressed satisfaction with progress made so far. 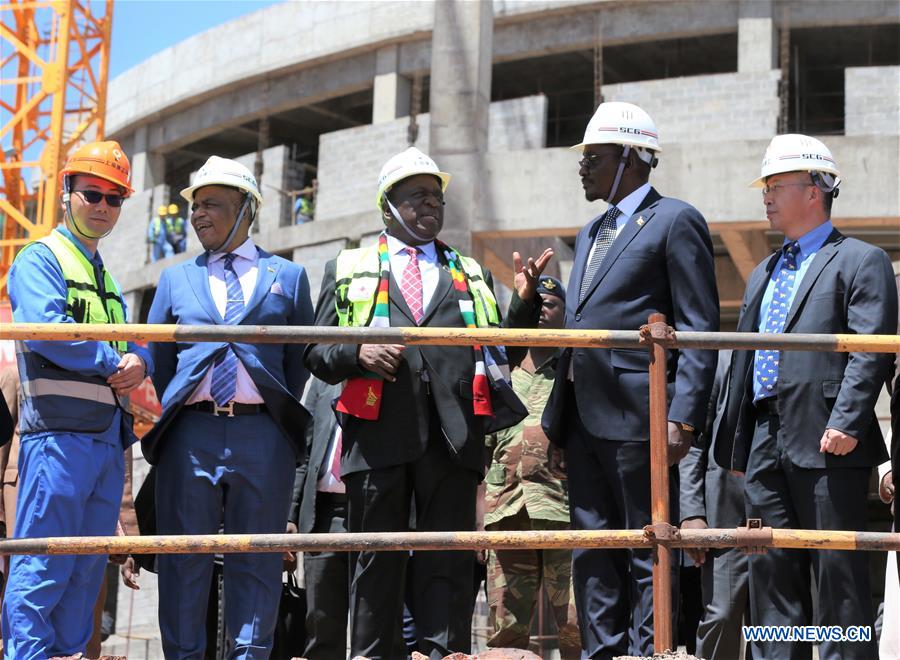 Zimbabwean President Emmerson Mnangagwa (C) inspects the site of the new parliament building in Mount Hampden, about 25 kilometers west of the capital Harare, Zimbabwe, on Nov. 27, 2019. (Photo by Chen Yaqin/Xinhua)

The visit to the site in Mt Hampden, about 25 kilometers west of the capital Harare, is his third since construction began in November 2018.

"We cannot tire in repeating our sincere and deep gratitude to China for the magnificent gesture...we are grateful," he said.

Mnangagwa said the site of the new parliament building, initially chosen by British colonialists to be the capital city, would also house two other pillars of government namely the Executive and the Judiciary as government moves to establish a new city to decongest the capital Harare.

"So the seat of power is going to be here. This is our sacred site where the destiny of the country shall be determined," he said.

He hoped local workers including engineers, craftsmen, and artisans would use the opportunity to acquire and learn more skills from their Chinese counterparts.

He thanked China for the several completed, ongoing and future infrastructure development projects in Zimbabwe, saying despite the criticism from detractors who try to undermine Chinese support, Zimbabwe"s leadership would remain forever grateful.

"We are happy to see the progress. We are amazed by the amount of progress at each visit which SCG has achieved over a very short period," he said.

The imposing six-storey building, sitting on a hill-top, is set for completion in March 2021. It is the largest building to be funded by China in a single African country in recent years.

The building has a seat capacity of 650 compared to 100 for the current parliament building, and will also have extra facilities for conferencing, 12 committee rooms and adequate space for office staff and parking.

The 100-seat building built during the colonial era had become small for parliament business and was no longer able to accommodate all the 350 parliamentarians and staff members.

Zhao Baogang, charge d"affaires of the Chinese Embassy in Zimbabwe, hailed the Zimbabwean leadership, Chinese contractor and workers for the progress in construction.

"We are happy that construction is making good progress. They will complete the concrete structure of this building very soon, which is a major milestone.

"This building, on completion, will become a new landmark for China-Zimbabwe friendship," Zhao said.

SCG project manager Cai Libo said the project had so far provided more than 800 local Zimbabweans with jobs and it pays particular attention to the safety of the workers.

He said structural construction of the building is expected to be finished by end of this year.

"We hope that by end of June next year, the Zimbabwean side will be able to connect permanent municipal water supply, power supply and telecommunications to the new parliament building site, so that we can test all the systems in the parliament building and prepare for its operation." Cai added.