Zones in border areas to strengthen ties with neighboring countries 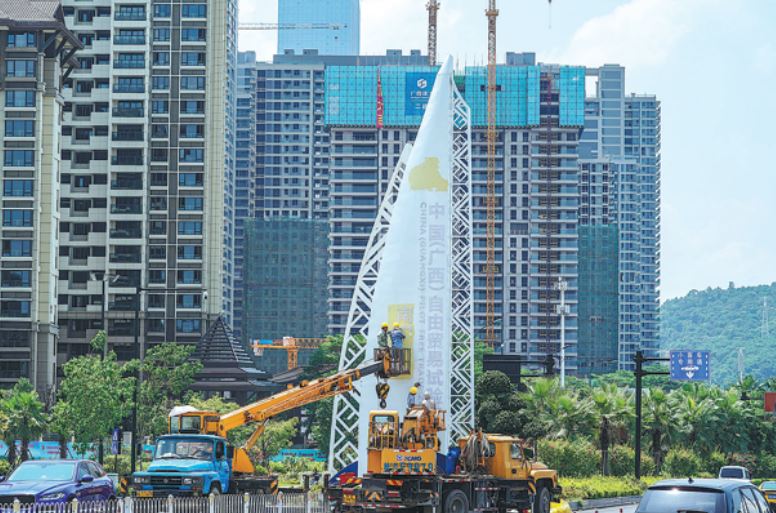 Workers set up a complex structure, which bears the name of the China (Guangxi) Free Trade Area, on Aug 29. (Photo: China News Service)

The other three zones are located in Shandong, Jiangsu and Hebei. All are expected to carry out reforms in line with their positioning and local characteristics.

"Half of the FTZs in the latest batch are located in border areas, reflecting the strong confidence of China's opening up," said Zhou Fangyin, a senior researcher with the Guangdong Institute for International Strategies.

In the past, FTZs were mainly set up in economic centers such as Guangdong and Shanghai. The deployment this time not only balances the extent of opening-up in different regions, but also illustrates all-round openness in the new era, Zhou said.

He said border provinces and districts need to give full play to the similarities of their cultures to those in neighboring countries, and play a bridging role. In the future, the border areas and neighboring countries need to stay in touch and jointly promote regional development, he said.

In 2013, China began to explore the FTZ model as a way to promote trade and investment, with the first one appearing in Shanghai. Since then, 18 pilot FTZs have sprung up across the country.

Bai Ming, a senior research fellow with the Chinese Academy of International Trade and Economic Cooperation, an affiliate of the Ministry of Commerce, said FTZs in Guangxi and Yunnan, two main gateways in China's southwestern region, will help facilitate the opening-up to member countries of the Association of Southeast Asian Nations, and he highlighted the significance of the China-ASEAN Free Trade Area.

Heilongjiang's FTZ will be conducive to opening to the north, and greatly accelerate the construction of the China-Mongolia-Russia Economic Corridor, Bai said. In addition, it will help connect the Belt and Road Initiative proposed by China with Russia's Far East development strategy, he added.

According to the plan issued by the Chinese government in August, Guangxi FTZ covers 119.99 square kilometers. The zone will construct international transport routes, build a pioneering zone for China-ASEAN cooperation, and develop itself into a gateway in the west for connectivity, the plan said. It will also promote cross-border trade, logistics and labor cooperation and boost opening-up in border areas, it said.

Ge Hongliang, a researcher at the China-ASEAN Research Center of Guangxi University for Nationalities, said the establishment of a free trade zone in Guangxi will further unleash the development potential of the border regions.

Ge said Guangxi is expected to become a frontier for neighboring countries to expand economic and trade cooperation with China. ASEAN member countries can strengthen their ties with the Chinese market via Guangxi.

Vowing to seize the opportunities brought by the newly established FTZ, Wei said the company will add several new supply routes through countries including Malaysia and Singapore, deepening the network in the Southeast Asian market.

The company already has mature cross-border routes through Vietnam, Laos, Thailand, and Cambodia, according to Wei.

Peng Zhiwei, director of the department of international economics and trade at Nankai University, said advanced experiences in the existing FTZs should be replicated nationwide, offering reference of reform and opening-up for other regions. The depth and breadth of the FTZ format will be further enhanced in the future, he said.