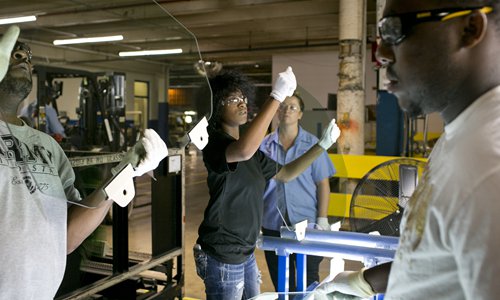 More Chinese enterprises are building their factories in the US, solving the problem of unemployment resulting from the US manufacturing industry slowing and weakening.

One of the most famous examples is that of Fuyao Group, a Chinese company that produces glass, after its experience was recorded in the Netflix-produced documentary American Factory. This is the first project from the former US president Barack Obamas' new distribution company, Higher Ground.

The film documented Fuyao Group's opening after purchasing a factory originally belonging to General Motors in Dayton, Ohio, and spending more than $200 million transforming it into its own glass manufacturing factory.

The new factory employed more than 2,000 workers and offered them a diverse range of jobs.

A female worker in the documentary named Jill said that the job in Fuyao's factory had allowed her to re-enter the middle class and move out of her sister's basement.

She was able to afford her own room after working in Fuyao, and the film shows her decorating her rented apartment with colorful lanterns before Christmas.

The American workers in the documentary are representative of many factory workers in the US struggling to make ends meet amid the contraction of the US manufacturing industry.

According to a New York Times report that quoted the Institute for Supply Management, the US manufacturing index was at 49.1 for August, down from 51.2 in July. Anything below 50 is considered a sign of contraction, according to the report.

Many factories have been closed down, leading to many American workers losing their jobs, and for many, also their houses and cars.

Chinese companies investing in factories in the US have eased their plight, and like Jill in the documentary, more factories from China like Fuyao are bringing houses and cars back to American workers.

The 2,000 US workers employed by Fuyao contribute 2.5 percent to the local government's total income tax every year, which is important for maintaining and investing in dilapidated public facilities, a report by jiemian.com said.

Liu Daochuan, general manager of the Fuyao American Company, told Xinhua News Agency that the company is trying to get local residents to understand Fuyao through actively participating in community activities and donating to local hospitals, public schools and disaster relief agencies.

The company aims to put roots down in the local community, and the Chinese managers want to make local employees feel that they are trusted and respected.

In addition to Fuyao, other Chinese enterprises have gone to the US to build factories and integrate further into the international market.

One such example is Chinese company BYD Auto, which has provided many jobs to workers in Southern California. BYD has recruited 567 local workers, developed worker training programs and set up research and development centers to develop high-end electric buses, according to the Beijing-based Reference News.

The report said that BYD will further create thousands of jobs for local workers after the second stage of the project.

Opening and running a factory in US is not an easy undertaking. Fuyao's American factory opened in 2014, but did not turn a profit until 2018. In the intervening years, the factory, which is run in a typical Chinese management style, has had to adapt to its American employees.

As shown in the documentary, there are many differences between American and Chinese workers, such as the way they work and their acceptance of the intensity of the work.

Chinese managers were frequently frustrated by these differences, which also resulted in Fuyao bringing about several changes in management.

Fuyao's experience is not an isolated case. An employee of another building materials company that opened a factory in the US told the Global Times on Friday that the first batch of American workers they hired had left the company, as they were unable to adapt to the working pace of the factory.

Now, only a few remain, and the factory relies on Chinese workers coming to the US to operate.

However, he said that the factory will continue to hire new American workers and train them to get through the breaking-in period, and will employ more local workers in the future.

Shi Yinhong, director of Renmin University of China's Center for American Studies, was not surprised by a Chinese enterprise's decision to set up a factory in the US.

Shi told the Global Times on Sunday that there is Chinese investment all over the world, and that before the US-launched a trade war with China, the US was a particularly favored destination for Chinese investment.

Chinese enterprises invest in a wide range of areas. In areas that do not involve security or high technology, some states, cities and local governments in the US actively welcome Chinese investment, Shi said.

In the general industrial sector, Chinese investment in the country has been substantial and is growing. This obviously helps deal with the unemployment problem in the declining regions of America, Shi said.

Song Guoyou, deputy director of the Center for American Studies under Fudan University in Shanghai, told the Global Times on Sunday that Chinese enterprises setting up factories in the US is of great significance for local employment, taxation and community operation, and is also conducive to promoting local economic and social development.

"It is clear that Chinese enterprises investing and building factories in the US can better promote local employment," he said.

However, from an overall perspective, Shi regards the success of Fuyao as not being representative.

Because of the restrictions of US policies and the Trump administration's call on the American manufacturing industry to return to the US, Chinese investment in the US fell by 80 percent in 2018 approximately, Shi said.

Song told the Global Times that in recent years, especially last year, Chinese companies have reduced their investment in the US because of its trade sanctions against China.

He said that in the current environment, the pressure and risk involved in investing in the US is relatively high, leading to hesitation among Chinese enterprises. "In terms of investment choices, Chinese entrepreneurs are very willing to invest in the US if the US market becomes more open and there are no restrictions on Chinese enterprises," Song said.