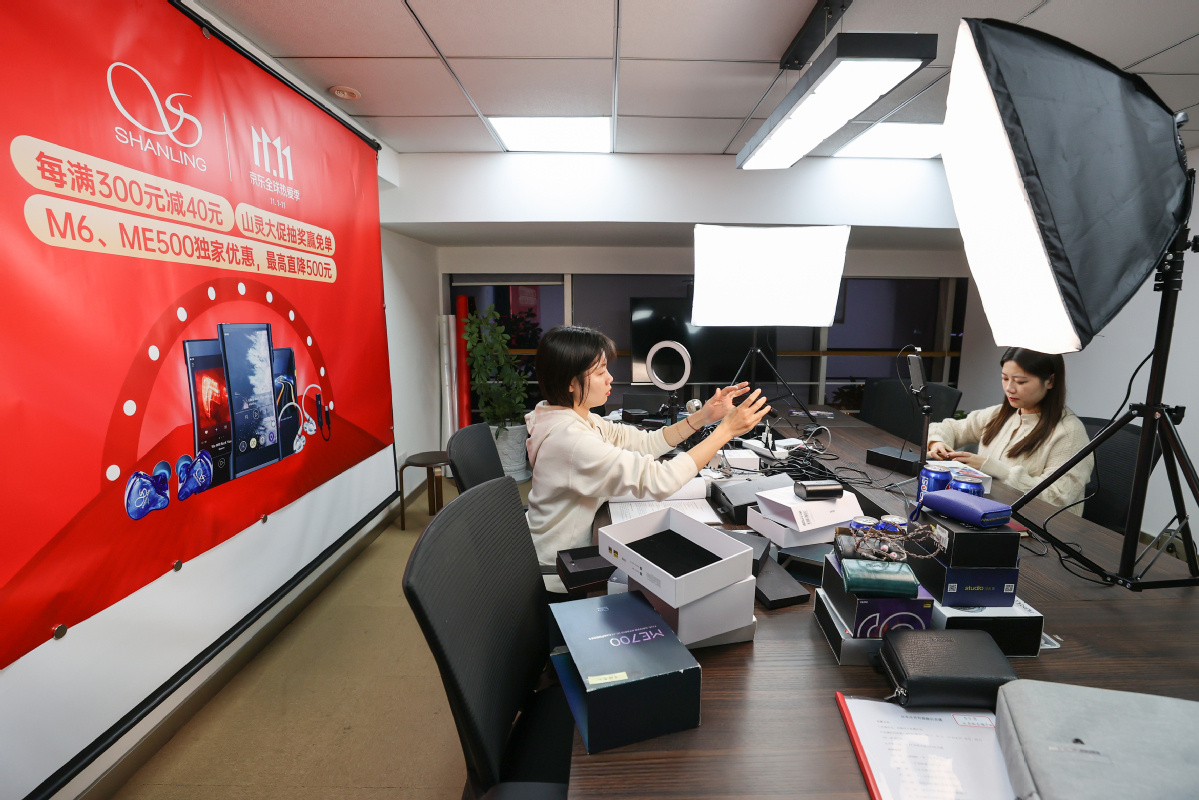 Employees of an e-commerce company promote sales via livestreaming during the Nov 11 shopping festival on Wednesday. (Photo: China Daily)

The healthy rebound in consumption seen during the just-concluded Nov 11 shopping festival has erased lingering doubts about China's retail health, thanks to the active participation of consumers and merchants from home and abroad, experts said.

Transactions worth 498.2 billion yuan ($75.2 billion) were conducted from Nov 1 to Nov 11 on the various platforms of Alibaba Group. International labels looking to cash in on China's trade up trend and domestic suppliers facing headwinds participated actively to attract customers from China.

Overall, 31,766 overseas brands offered goods on Alibaba's cross-border platforms during the shopping period. The gross merchandise volume for US brands reached $5.39 billion during the period, the largest contribution from any single country or region outside of China.

"A China strategy－and a digital strategy－are going to be absolutely critical for success in the future," Alibaba President Michael Evans said on Wednesday.

L'Oreal Group championed the gala by topping the beauty category for the fourth year in a row. The company's gains stretched beyond transaction volume to include a variety of co-creations and customer engagements such as a sustainability packaging campaign this year.

"People always want to be surprised by the event. So brands need to reinvent themselves every year, and probably in China every month," said Fabrice Megarbane, president and CEO of L'Oreal China. "This is the opportunity to question ourselves 'Are we relevant enough to the consumers?'"

Offline merchants, which take up more than 70 percent of China's total retail sales, have been actively participating in the event, leveraging online marketing tools to cash in on rising consumer enthusiasm during the event, said Jay Xiao, CEO of LexinFintech, an online consumption and consumer finance platform in China.

Alibaba data showed that each of the 105 participating industrial clusters generated 100 million yuan of GMV during the period. For instance, the small merchandise complex in Yiwu of Zhejiang province saw transaction volumes jump 20 times during the campaign.

The shopping gala is the latest epitome of the dual circulation development pattern bolstered by the country, said Zhong Hongjun, director of the Digital Economy Research Center at the Shanghai University of Finance and Economics.

"It is essentially driving the domestic and international circulation, by helping foreign labels tap into the growing army of Generation Z (customers) in China," he said. "It's also a test bed for intelligent manufacturing, which empowers SMEs in inland areas by narrowing the digital gap and enhancing productivity."

But the sector could face a fresh round of cooling, after Chinese market regulators unveiled proposals on Tuesday that include guidelines on how antimonopoly measures should be applied to internet companies. Experts said the prospective areas include unfair pricing or alliances aimed at keeping out new players.