SHANGHAI, Dec. 29 (Xinhua) -- Japanese lifestyle megastore "niko and ..." opened a flagship shop on Dec. 21 on the bustling thoroughfare of Huaihai Road in Shanghai, becoming the latest foreign brand to set foot in the commercial zone known for its numerous flagship stores. 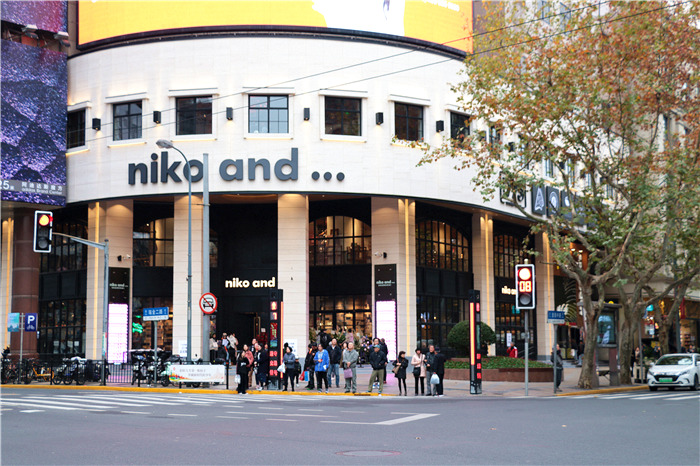 The first in China and largest in the world, the brand's three-story store in Shanghai covers an area of 3,500 square meters and sells up to 4,000 types of merchandise.

Affiliated with Adastria Co., Ltd., niko and ... has more than 140 stores worldwide, of which 110 are in Japan. It signed a strategic cooperation agreement with Shanghai Huaihai Commercial (Group) Co., Ltd. in mid-2019 and has hence began expanding its presence in the Chinese market.

"The Chinese market is full of opportunities and is very important for us. Shanghai is a modern city and young people here embrace new things quickly, so we decided to open our first store here," said Yoshiaki Kitamura, general manager of sales at Adastria Co., Ltd. "We are looking forward to further development and integration into the Chinese market."

According to Kitamura, in order to attract more consumers, the Shanghai store sells customized products with local features and plans to cooperate with local chefs to present more gourmet food in the future.

For businesses tapping into a new market, the first step matters. The location of their first appearance is not only determined by cash flow, but a combination of brand image, exposure and plans for the future.

China, with its huge proven consumption potential, has become the top choice for many overseas brands.

Christophe Caillaud, president of Liaigre Holdings, said it took the brand three years to prepare for the first showroom in China as it is a "brand setter," and would act as a channel to form lasting relationships with customers. "China's consumption upgrade is good news for us and we find the business environment here very friendly," said Caillaud.

Canadian fast-food restaurant chain Tim Hortons made its debut in China with its first store opened in downtown Shanghai in February this year. Ten months on, it has opened 32 branches and plans to further push its number of stores in China to 1,500 in the next decade.

"Compared with the per capita annual coffee consumption in European and American markets, the coffee market in China has huge potential to grow," said Lu Yongchen, CEO of Tim Hortons China. "The coffee market in Shanghai is comparatively mature in China. If we can succeed in Shanghai, our market prospects in China will be promising."

Statistics show the number of first stores opened in Shanghai reached 498 in the first half of 2019. The first-store economy will help the city further boost tourist spending and improve the business environment, according to Liu Min, deputy director of the Shanghai Municipal Commission of Commerce.

Putting the first store in China's first-tier cities such as Beijing and Shanghai used to be a common practice. But now inland second-and third-tier cities have become new investment hotspots.

Southwest China's Chengdu, for example, welcomed 435 first stores in the first 11 months this year, more than double the number from last year.

Among them are New York-based contemporary brand Blancore and Dior, which set up a pop-up store in the heart of a traditional temple in Chengdu to launch the pre-fall 2019 men's collection by Kim Jones.

To woo more brands to set up their first stores, many Chinese cities have rolled out preferential measures.

Beijing opened a "green channel" to facilitate businesses to set up their first stores in the city, providing necessary financial support to cover rent and renovations.

Chengdu published a guideline in April, vowing to lure 200 new first stores every year by 2021. In September, east China's city of Nanjing rolled out multiple measures to provide rental support and preferential policies for companies opening their first stores in the city.

In July, LEGO Group opened its 100th retail brand store on the Chinese mainland in Xi'an, the first certified store in northwest China, in a move to expand its footprint in the country's inland and lower-tier cities.

Paul Huang, general manager of LEGO China, said LEGO's next step is to further tap into the Chinese market. "We're confident in the development of our business in China," said Huang.

More brands have joined the wave of launching first stores in China. This year, Shanghai alone has ushered in the first flagship theme shop in China of Belgian comic series "The Adventures of Tintin," and the first YG PLACE of YG Entertainment in China. Soon, a Naruto World theme park and China's first Smurfs Theme Park will also be settled in Shanghai.