A key figure in China's real estate market reforms in the 1990s has suggested the country should abandon restrictive policies that are strangling domestic demand, at a time when it is needed the most due to the ongoing China-US trade war. 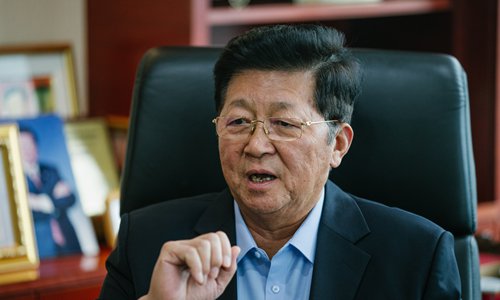 Meng Xiaosu, dubbed the "Godfather" of China's real estate industry because of his leading role in drafting China's property reform policies, warned of the danger of continuing restrictive policies in sectors such as the all-important real estate market and the automotive market.

"Whether a trade war or a technology war, the Trump administration launched its attack from a point of strength against which China cannot equally retaliate," Meng, who served as secretary to former vice premier Wan Li, a reform and opening-up pioneer, told the Global Times in his office in Beijing's Central Business District.

"It is in this critical sense that China should tap its domestic demand - its ultimate response to a US-waged trade tariff war - as such measures will entice multinational companies to expand in the Chinese market," Meng said, looking at the glistening China World Trade Center Tower across the street from his office.

China and the US have been locked in a trade war. Although the two countries agreed to resume halted trade talks at the end of June, the US continues to impose tariffs on nearly half of its imports from China.

Chinese cities have cyclically used restrictive policies, from insisting that certain conditions be met to enable people to buy property, to curbing the number of homes people can own, as a means to rein in runaway home prices.

Such policies have disturbed the natural growth of Chinese cities, curbing domestic demand in a wide array of sectors from steel and cement to coal and electricity, Meng said.

Besides practical hurdles, there are also top-down restrictive policies that curbed supply. Treating Hong Kong as a teacher, mainland cities only developed some 20 percent of land within their jurisdiction, keeping vast areas out of the real estate supply pipeline, according to Meng.

Meng is not the only advocator to lambast restrictive policies. Li Daokui, a leading macroeconomist from Tsinghua University, has slammed policies issued by some local governments on higher emission standard vehicles that have scared consumers from buying cars.

Meng dismissed the likelihood of Chinese cities experiencing a Tokyo-style property bubble burst, saying that the low level of urbanization in China means it is too early for such worries to be worthy of serious discussion.

But he did share concerns that many Chinese people's personal property is predominantly tied up in home ownership, though he disagreed with some measures to rebalance the wealth structure.

"Many suggest shrinking people's home ownership wealth so the proportion of financial assets may be lifted. This reductive thinking won't work," Meng said, noting that expansive thinking, such as equity release to give financial resources to senior citizens and real estate investment trusts that revitalize dormant urban properties are the right way to address the imbalance.