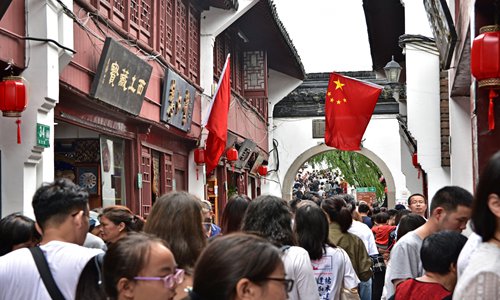 Tourists flock to a traditional street in Shanghai on October 2, 2019. (Photo: IC)

Chinese people spent more than ever during the weeklong National Day holidays at home and abroad, showing that consumption power in the world's second-largest consumer market still has great potential.

In the first seven days of October, dubbed Golden Week, retail and catering enterprises across the country saw sales of 1.52 trillion yuan ($212.63 billion), up 8.5 percent on the same period last year, data from the Ministry of Commerce (MOFCOM) showed on Monday.

MOFCOM said consumption of tourism, culture and sports is booming, and the night economy and the "first-store economy" have become new highlights. The first-store economy refers to new brands setting up brick-and-mortar stores for the first time.

The data is in line with other official figures and online travel platforms. This shows how the Chinese enjoyed the holidays with more willingness to travel and more spending on goods.

The Ministry of Transport said Monday there were 520 million trips on all modes of transportation in the first six days of the month, with the number of rail passengers up 5.2 percent on the same period last year.

"Domestic demand has made a big contribution to the nation's economy, and the trend is stable, showing the resilience of the economy," Cong Yi, a professor from the Tianjin University of Finance and Economics, told the Global Times on Monday.

"The data shows that local governments have put a lot of effort into boosting cultural and tourism markets. Domestic demand will be stimulated only if governments are willing to boost the market," Tian Yun, a vice director of the Beijing Economic Operation Association, told the Global Times on Monday. The rising data also injects positive momentum in the downward economy for the fourth quarter, he added.

A white-collar worker surnamed Li told the Global Times on Monday that she and her boyfriend spent 17,000 yuan on a six-day trip to two destinations in Southwest China's Yunnan Province. "My biggest expense was the accommodation," she said.

Officials in Southwest China's Chongqing Municipality even called on local residents to offer rooms to tourists at popular city locations such as Jiefangbei (Liberation Square) in the central business district from Thursday to Saturday.

Users of Alipay spent 45 percent more in physical stores in the first three days of the week compared with last year, it said, adding that sales sold through smart sales such as facial recognition had soared by 90 percent on the same period last year.

The Ministry of Culture and Tourism said that "red tourism" was a main theme of the National Day holidays tourism market.

The uptick in consumption in the service economy has also spread beyond China's borders, with the seven-day holiday becoming a global Golden Week.

A report from travel site Ctrip.com said that travelers from Shanghai and Beijing spent the most per person at 7,000 yuan, far higher than residents of other cities. Japan was the most desirable destination, with 30 percent more people traveling there during the holidays than last year.

Spending on outbound trips was nearly 2,500 yuan per person with Alipay in the National Day holidays, up 14 percent on the same period last year, a report released by Alipay and Fliggy, Alibaba's travel services platform, showed.