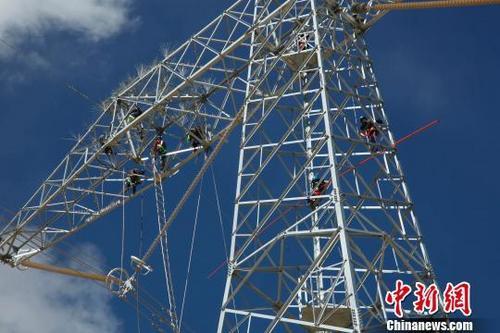 The Qinghai-Tibet AC/DC Grid Interconnection Project, also nicknamed the “Heavenly Road of Electricity,” has accumulatively supplied 5.5 billion kilowatt-hours (kWh) of electricity to southwest China’s Tibet Autonomous Region since it went into operation at the end of 2011, Chinanews.com reported on Jan. 6.

According to the State Grid Qinghai Electric Power Company, the “Heavenly Road of Electricity”, which has been running smoothly for the past seven years, has helped the grid of central Tibet with the outward transmission of 2.3 billion kWh of electricity, providing strong support for the energy supply in the sound and stable economic and social development of Tibet.

Stretching from Xining, capital of northwest China’s Qinghai Province to Lhasa, capital of Tibet, with an overall length of 2,530 kilometers at an average elevation of 4,500 meters, the “Heavenly Road of Electricity” was the world’s most challenging power transmission and transformation project to build, with the highest altitude and longest distance. It was built as one of the 23 key projects under China’s Western Development Strategy.

"The 'Heavenly Road of Electricity' has provided a solution to the bottleneck problem faced by the energy sector in Tibet,” said Li Xiaoming, head of the Qaidam Basin converter station of a electric repair services company of Qinghai, disclosing that the DC line has maintained a power transmission load of 550,000 kWh per day since Dec. 15, 2018.

According to Li, the “Heavenly Road of Electricity” has played the leading role in the power supply of central Tibet this winter, supplying 50 percent of the total power load in the region.

The “Heavenly Road of Electricity” has successfully connected the Tibet grid, which had previously been running in isolation, with the whole northwest power grid. Li added that it had also optimized the structure of power supply and solved the power shortage that had long troubled central Tibet.