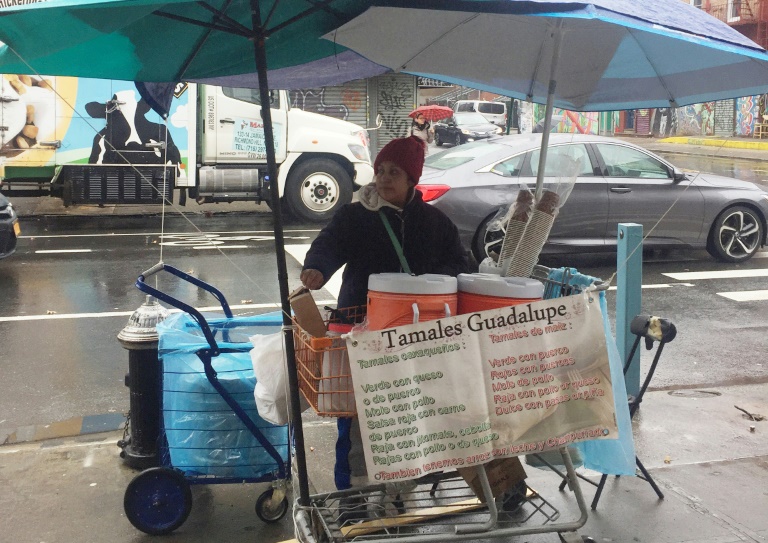 Mexican Guadalupe Galicia, 40, has been selling tamales and rice pudding for more than 20 years in New York. She has paid about $12,000 in fines for not having a permit to sell food.(Photo: AFP)

For two decades, Guadalupe Galicia has been waking up every day at 4:00 am to make tamales and rice pudding to sell on the streets of New York.

She is one of thousands of vendors, many of whom are undocumented migrants, who hawk yummy treats in the Big Apple, but they are facing a litany of problems, from weather to assaults to arrests to even deportation.

"One of their biggest fears is the police, and that's why they are extra vulnerable," Julie Torres Moskowitz, from the Street Vendors Project (SVP) support group, told AFP.

New York is known for hot dogs, pizza, bagels and pretzels, but the food scene is way more diverse.

From Venezuelan arepas and Ecuadoran baked piglet to Middle Eastern falafel sandwiches and Tibetan momos, the city has it all.

Galicia, an undocumented migrant from Mexico and single mother of six children, sells tamales stuffed with all sorts of fillings for $2.25 each in the Bushwick area of Brooklyn.

"We are only making enough money to support our children," says the 40-year-old, who also sells champurrado -- a hot, thick Mexican drink made with chocolate, corn flour and spices.

Inclement weather is a problem -- temperatures regularly drop below freezing during the winter months -- but so are assaults, robberies, fines, confiscations and arrests, according to SVP.

The women vendors are particularly vulnerable, they say. Arrests can result in deportation if a vendor's papers are not in order, which they often aren't, the group says.

Moskowitz, who sits on SVP's advisory board, says some attacks and thefts go unreported because of fear of dealing with the police.

To sell street food, vendors require a license that costs about $50 and a permit for the cart that costs another $200.

It's very hard to obtain a permit, though: although there are more than 10,000 vendors, the number of permits has been capped at 2,900 since 1983 -- meaning many operate at their own risk.

There are some 2,000 additional permits for temporary workers but that isn't enough for everyone.

The result is a black market in permits, with owners subletting theirs for $25,000, often through intermediaries, several vendors told AFP. Fake permit scams happen all the time, they say.

Outside Manhattan, in Brooklyn, Queens and The Bronx, street food is mostly sold by women.

SVP says they endure more harassment from aggressive customers than their male counterparts.

They also are more likely to be fined by police, the group says.

Most of the female food sellers, like Galicia, are the main breadwinners in their families.

The early hours suit them so they can take care of their children after school, Moskowitz says.

In November, a video of a policeman handcuffing an Ecuadoran woman selling churros in the subway, where the sale of food is prohibited, went viral on social media, prompting outrage.

It was also in protest at Governor Andrew Cuomo's decision to hire 500 more police officers to monitor the subway.

For years, Galicia worked without a license. She estimates that she has paid about $12,000 in fines. Several times, her food was confiscated.

"The city has to give us work permits because we are also paying sales taxes," she complained.

"There are only two options: leave the family without eating or pay the ticket," says Sabina Morales, a 62-year-old undocumented Mexican woman who sells fruit and vegetables in Queens.

Jessica Ramos, a Democratic member of New York's state senate, has introduced a bill that will eliminate the cap.

A less ambitious bill is also going through the city council that would raise the number of permits to 4,000 within a decade.

"These people are trying to make a living in an honest way," said Ramos, who was raised in the Queens neighborhood of Jackson Heights -- a street food paradise where more than 100 languages are spoken.

Real estate developers, supermarkets and restaurants are among opponents of increasing the number of permits, says Ramos. They denounce what they perceive as unfair competition caused by the vendors' low prices.

But Ramos says there is room for everybody.

Democratic Brooklyn councilor Rafael Espinal, in whose district the churros vendor was arrested, says police should focus on tackling violent crimes, not "poverty crimes" such as selling street food.

A couple of years ago, Morales bought a permit for $15,000, but it turned out to be fake and she lost all of her savings.

"We must end the black market so that we can all work," said Morales, who raised six children while working outdoors.

"That's why we come to this country -- to work, to get ahead, to improve the life of our family."