BUSINESS 'Never give up': Draghi sums up hard-fought ECB term

'Never give up': Draghi sums up hard-fought ECB term 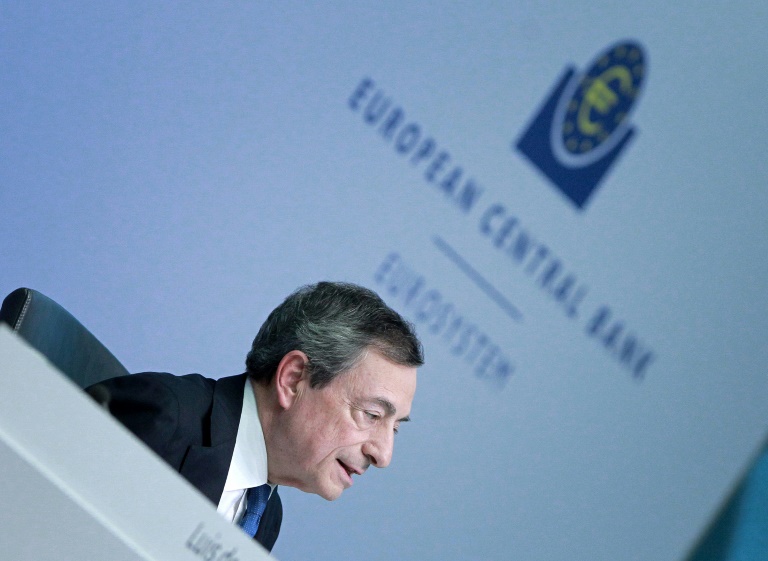 During his eight years as head of the European Central Bank, Mario Draghi, is widely credited with saving the euro. (Photo: AFP)

Departing European Central Bank president Mario Draghi said Thursday the proudest legacy from his eight-year term was the ability to "never give up" in the face of economic crises, internal dissent and external criticism.

"In a sense, this is a part of our legacy: never give up," Draghi said at his last press conference in Frankfurt of his work with colleagues on the ECB governing council since 2011.

"If there is one general thing I'm proud of, it's the way in which the governing council and myself have constantly pursued our mandate" of price stability in the 19-nation eurozone, the 72-year-old added.

"Under Mario Draghi's presidency, the ECB's determination to fulfil its mandate, and its commitment to do whatever it takes within this mandate, provided the central bank with its greatest asset: its credibility," commented Pictet Wealth Management strategist Frederik Ducrozet.

As expected, Draghi left the bank's monetary policy unchanged at his final meeting, after the council agreed just last month cut the interest rate on banks' deposits to -0.5 percent and loosen conditions on a new round of cheap credit to lenders.

Looking to calm fears that the divisions could hobble the ECB, Draghi said "one of the dissenters called for unity and full implementation of the policy package" while another said "bygones are bygones".

"I've taken this as part and parcel of the ongoing debate and discussion," he told reporters, adding it was not the first time disagreements had divided the 25 council members.

"It seemed as if the hawks did not want to spoil Mario Draghi's last meeting as ECB president, illustrated by the fact that today's decisions were taken unanimously," said ING bank economist Carsten Brzeski.

Draghi, who is widely credited with saving the euro, also played down fears that incoming president and former IMF chief Christine Lagarde could soon face a similar internal battle.

"It's going to take quite a bit of time" before the central bank will run into self-imposed limits that could force it to rejig bond-buying, he said.

Asked if he had any tips for his successor, Draghi said "no advice is needed".

"She knows perfectly well what she has to do."

On personal questions, Draghi avoided flights of emotion or speculation about his next steps, referring all enquiries to his wife.

Draghi's final conference was far from a victory lap, as he opened by emphasising the "downside risks" that continue to threaten the eurozone and are tied to "uncertainties related to geopolitical factors, rising protectionism and vulnerabilities in emerging markets."

Data and sentiment surveys nevertheless point to "moderate but positive growth in the second half" of 2019, Draghi noted.

But he added that new information since September's meeting confirmed his belief it had been right to act.

The Italian economist also reiterated a long-standing refrain that by using their tax and spending powers, governments could help the ECB.

"It's clear that with fiscal policy the objectives of monetary policy will be reached sooner and with fewer (of the) side effects" warned about by the ECB's critics, he said.

While national governments could do more by spending where there is room, or tidying up their finances where there is not, a centrally-managed eurozone "fiscal capacity" will be needed, Draghi warned.

"There is one thing that all the successful monetary unions have, and that's a central fiscal capacity... of an adequate size, something that can be used counter-cyclically" to smooth out downturns, he said.

In many eyes, Draghi leaves as "the president who brought the ECB to new professional levels, in terms of communication, institutional set-up and toolkit of monetary policy instruments," ING's Brzeski commented.

What's more, he was "the ECB president who saved the eurozone from falling apart, only with words," he added, referring again to Draghi's 2012 vow to do "whatever it takes" to keep the eurozone together.