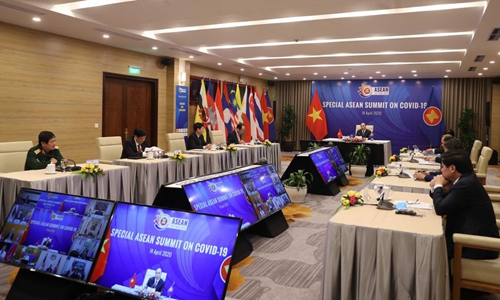 Photo taken on April 14, 2020 shows a scene of Vietnamese officials in the country's capital city of Hanoi attending the Special ASEAN Summit on COVID-19 held in videoconferencing format. (Photo: Xinhua)

As the Association of Southeast Asian Nations (ASEAN), China, Japan and South Korea held a video conference on Tuesday to discuss responses to the COVID-19 pandemic, Chinese experts urged joint regional efforts to protect Asian supply chains from the impact of economic disruptions in the US and the EU.

"It's urgent for these economies to sign the Regional Comprehensive Economic Partnership (RCEP) in order to boost trade and find new eco-nomic growth momentum in the region at a time when demand in the US and the EU has slumped as factories remain shut," said Shen Minghui, secretary-general of the Center for APEC and East Asian Cooperation with the Chinese Academy of Social Sciences.

New data showed that exports by major economies in the region with-ered because of the virus outbreak. South Korea's exports for the first 10 days of April slid 18.6 percent year-on-year, according to the Korea Customs Service. China reported a dip of 3.5 percent in March to 1.29 trillion yuan ($182.97 billion).

Against the backdrop, industrial cooperation in the region should be ex-panded, while dialogue at the corporate and government levels should be strengthened, Shen told the Global Times on Tuesday.

Trade among the regional economies exceeds 10 trillion yuan, of which 60 percent belong to trade of intermediate products, Shen pointed out.

Apart from making trade and investment more convenient, economies in the region should strengthen communication and evaluation, and guard the security of industrial chains, Wei Jigang, a research fellow with the Development Research Center of the State Council, China's cabinet, told the Global Times on Tuesday.

The regional economies are highly complementary in terms of industrial and supply chains, and every major economy has unique characteristics and standing in the industrial chain.

"For example, China has the most complete low-medium-high end in-dustrial structure, huge consumption potential and improved support facilities, while Japan and South Korea have advantages in the medium- to high-end as well as international shipping and precision manufactur-ing," Wei said.

Qingdao, East China's Shandong Province teamed up with domestic e-commerce giant Pinduoduo on April 9 to attract Japanese and South Ko-rean firms to debut on the platform, the company said. By ramping up consumption, they aim to promote smooth logistics and supply chains to cement trade relationships among the economies.

The ASEAN replaced the EU to become China's largest trade partner in the first quarter of 2020, with bilateral trade bucking coronavirus fears to rise 6.1 percent to 991.3 billion yuan, data from China's General Ad-ministration of Customs (GAC) showed on Tuesday.

GAC spokesperson Li Kuiwen told a press briefing that the upgraded pro-tocol of the China-ASEAN Free Trade Area agreement, which took effect in October 2019, partly contributed to the growth amid the virus out-break.