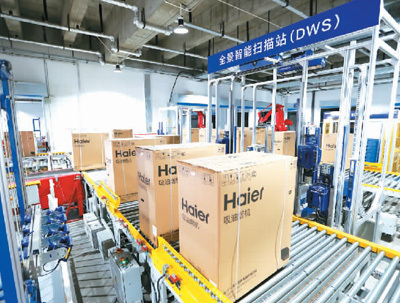 The “Guidelines on Supporting the Healthy Development of New Business Forms and New Models, Activating the Consumer Market and Expanding Employment”, jointly issued by the National Development and Reform Commission (NDRC) and other departments, call for the development of an "unmanned economy" based on new technologies, and support the construction of smart factories to realize transparent production processes, intelligent production sites and modernized factory operation and management.

Shanghai recently announced the implementation of the special action for building "100+ benchmark unmanned factories", which aims to build 100 benchmark unmanned factories and 10 demonstration smart factories by 2022. During this process, nearly 10,000 additional robots are expected to increase production efficiency by an average of more than 20 percent and reduce operating costs by the same proportion.

The application of unmanned equipment is accelerating in the logistics industry. During the fight against the COVID-19 epidemic, JD.com, an e-commerce platform in China, set up a drone route near Baiyangdian, north China's Hebei province, using Y3-MAX drones to deliver daily supplies to villages. Unmanned delivery and unmanned express delivery are becoming the focus of many large logistics enterprises of the new model.

Industry insiders pointed out that artificial intelligence and its applications in industrial robots, automatic driving, automatic loading and unloading will enable unmanned processing of monotonous, complicated, difficult and dangerous jobs, which makes the production process intelligent and promotes the reduction in costs of production, circulation and services while also increasing efficiency.

"From manufacturing to agricultural production, from docks to mines, intelligence will be a typical feature of the new industrial revolution, and it has become a consensus that artificial intelligence will empower the real economy,” according to Wang Chongjun, deputy director of the Institute of Computer Application, Nanjing University.

By the end of May, the number of UAV-related enterprises in China had exceeded 55,000, with 16,000 unmanned retail enterprises and more than 11,000 driverless enterprises, according to relevant company data. In the first five months of this year, 1,827 new retail companies related to unmanned selling were set up, a 37 percent increase over the same period in 2019.