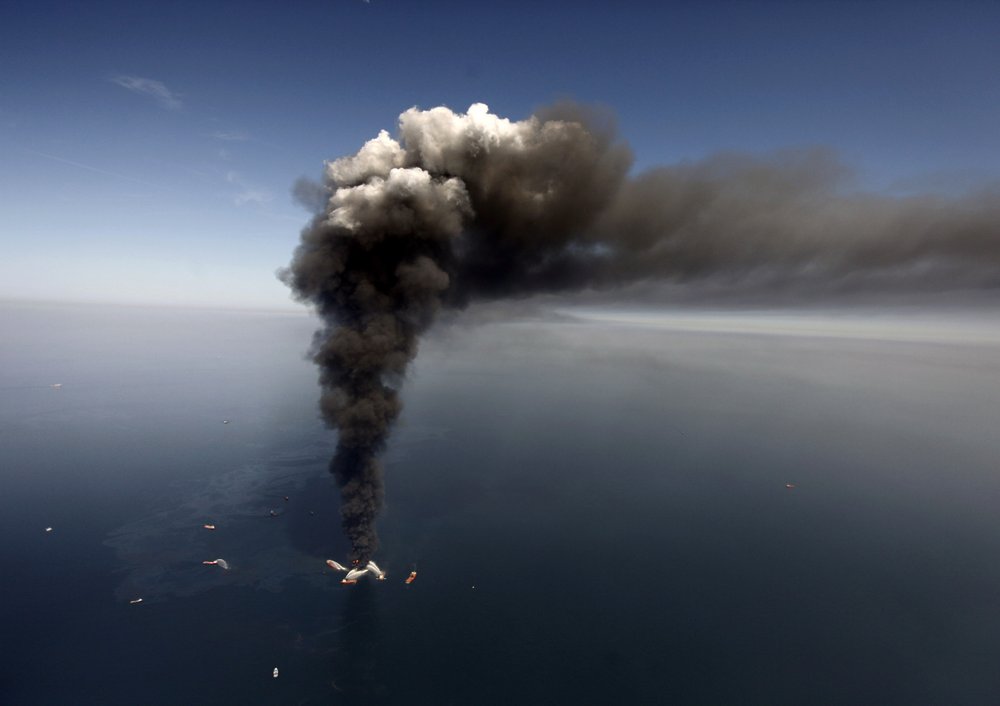 This April 21, 2010 photo shows oil in the Gulf of Mexico, more than 50 miles southeast of Venice on Louisiana's tip, as the Deepwater Horizon oil rig burns. (File photo: AP)

Ten years after an oil rig explosion killed 11 workers and unleashed an environmental nightmare in the Gulf of Mexico, companies are drilling into deeper and deeper waters, where the payoffs can be huge but the risks are greater than ever.

Industry leaders and government officials say they’re determined to prevent a repeat of BP’s Deepwater Horizon disaster. It spilled 134 million gallons of oil that fouled beaches from Louisiana to Florida, killed hundreds of thousands of marine animals and devastated the region’s tourist economy.

Yet safety rules adopted in the spill’s aftermath have been eased as part of President Donald Trump’s drive to boost US oil production. And government data reviewed by The Associated Press shows the number of safety inspection visits has declined in recent years, although officials say checks of electronic records, safety systems, and individual oil rig components have increased.

Today companies are increasingly reliant on production from deeper and inherently more dangerous oil reserves, where drill crews can grapple with ultra-high pressures and oil temperatures that can top 350 degrees (177 degrees Celsius).

Despite almost $2 billion in spending by the industry on equipment to respond to an oil well blowout like BP’s, some scientists, former government officials and environmentalists say safety practices appear to be eroding. And there are worries that cleanup tactics have changed little in decades and are likely to prove as ineffective as they were in 2010.

“I’m concerned that in the industry, the lessons aren’t fully learned — that we’re tending to backslide,” said Donald Boesch, a marine science professor at the University of Maryland who was on a federal commission that determined the BP blowout was preventable.

“I think the event 10 years ago really initiated kind of a new day in offshore safety,” said Debra Phillips, of the American Petroleum Institute, a standards-setting trade association.

Companies have a financial interest in preventing a repeat of the 2010 disaster, which cost BP more than $69 billion in the cleanup, fines, fees, and settlements. Questions over environmental effects linger, and litigation continues over health problems suffered by cleanup workers.

Competing oil giants joined in the disaster’s wake to create the Marine Well Containment Co., which has equipment and vessels positioned regionwide to quickly corral oil if another major spill occurs.

“All of (the) industry wanted to make sure that nothing like it could ever happen again,” said CEO David Nickerson, at the company’s complex near Corpus Christi on Texas’ coast.

He was dwarfed by “capping stacks”″ — multistory structures of piping, valves, and gauges designed to be lowered to halt a major high-pressure blowout.

The hope is that such equipment won’t be needed. Yet the Trump administration has relaxed rules adopted in 2016, including the frequency of drilling rig safety tests. That’s projected to save energy companies roughly $1.7 billion in compliance costs over a decade.

An AP review found the number of safety inspection visits by the US Bureau of Safety and Environmental Enforcement — created after the spill — went down more than 20% over the past six years in the Gulf.

Industry advocates say inspection figures reflect a greater emphasis on complex systems that influence safety rather than minor technical matters and note there are fewer if bigger, active oil platforms. They say the administration’s rule changes allow companies to deviate from “one-size-fits-all” standards not always suited to water pressure and other conditions at individual wells.

“Sometimes, when the regulations are quite prescriptive, it can actually inadvertently deteriorate safety,” said Phillips, of the American Petroleum Institute.

Environmentalists and critics say the changes appear to be eroding safety practices adopted after the spill.

“The industry itself is in the lead in trying to reduce its risk and protect its workers,” said Bob Deans of the National Resources Defense Council, one of several environmental groups suing over Trump administration changes. “The problem comes when you’re behind schedule, over budget and pressure comes from on top to get the job done and move on to the next project. That was the problem on Deepwater Horizon.″

The federal commission that studied the accident and the federal judge who oversaw myriad lawsuits put the blame on BP for poor management. In a key court ruling, US District Judge Carl Barbier said “profit-driven decisions” on the rig were made in “conscious disregard of known risks.”

Debate over the strength of regulation and industry safety consciousness goes on as wells close to shore run dry and companies drill in deeper waters farther offshore.

The average depth of deepwater drilling steadily increased, from about 3,500 feet (1,070 meters) beneath the surface in 1999 to more than 4,600 feet (1,400 meters) in 2019, according to an AP analysis of data from the US Interior Department’s Bureau of Ocean Energy Management.

Drilling deeper makes well sites harder to reach in a blowout or other accident.

In the past year, the industry began producing crude for the first time from ultra-high pressure crude reserves in the Gulf. Overall production hit a record 2 million barrels a day before the coronavirus pandemic caused demand to plummet.

Pressures in those wells can approach 20,000 pounds per square inch, compared with almost 12,000 pounds for Deepwater Horizon.

Trump administration changes have intensified the debate over how tightly the government should regulate, and what decisions should be left to industry professionals.

Much of the discussion centers on rules intended to keep wells under control, such as requirements for blowout preventers that failed in the spill.

As deep-water activity has expanded, the number of inspections carried out by the government’s safety bureau has declined.

Bureau spokesman Sandy Day said the inspection figures reflect visits by inspectors to rigs, platforms and other facilities. Day said the data doesn’t reflect electronic records reviewed remotely or the increased time spent at each facility and all inspection tasks performed. Those, he said, have increased from 9,287 in 2017 to 12,489 last year. The agency didn’t provide a breakdown.

“While on the facility we did numerous inspections of different items,” Day said, including equipment for preventing blowouts, fires, spills, or other major accidents. He said electronic records allow more work to be done from shore, rather than digging through paperwork on site.

The number of warnings and citations issued to companies for safety or environmental violations peaked in 2012 and has since fallen even faster than inspections. The decline accelerated under the current administration, agency documents show.

Fewer inspection visits and fewer citations suggest the safety improvements that took hold after the 2010 spill are unraveling, said Matt Lee-Ashley, former deputy chief of staff at the Interior Department.

“There is a value in having inspectors on board frequently. You have to establish a culture of enforcement,” said Lee-Ashley, now with the Center for American Progress, a left-leaning advocacy group.

Industry representatives maintain that inspection numbers don’t automatically translate to less effective oversight. Inspectors are less interested than in the past in technical violations and are focused on making sure comprehensive safety systems are in place to prevent major accidents, said Erik Milito, of industry trade group the National Ocean Industries Association.

“If you think about going out with a checklist and see if there are enough eyewash bottles, everybody has steel-toed shoes — you can do that, and bounce around from facility to facility,” he said. “But there’s got to be an emphasis on your more significant potential incidents, potential blowouts.”

At the center of the debate is the agency formed to enforce offshore safety after Deepwater Horizon, the Bureau of Safety and Environmental Enforcement, and its director under Trump, Scott Angelle.

Angelle, a former Louisiana official who was a paid board member for an oil logistics company, has faced criticism from Democratic lawmakers and environmentalists for pushing through the relaxed safety rules against agency staff advice.

Angelle said initial staff recommendations to keep the two-week testing frequency for blowout preventers “were not ready and ripe.” His office later released an Argonne National Laboratory study that concluded relaxing the testing regimen would have cost benefits and could improve safety since frequent equipment testing can cause wear and tear that results in accidents.

Michael Bromwich, the safety agency’s director under Obama, credited the industry for taking action after the spill to overhaul drilling. But as time passed, Bromwich said companies became complacent and are now overseen by a man he calls an industry booster.

“You need to have somebody who believes in the regulatory mission and who doesn’t view themselves and doesn’t view their agency as a cheerleader for the industry,” Bromwich said.

Requests over several weeks to interview Angelle were declined. Spokesman Day said the director wants to make the bureau a “do-it-all” agency that can protect the safety and the environment while advancing Trump’s goal of US “energy dominance” globally.

Even if companies are prepared for another Deepwater Horizon, they could be overwhelmed by other accidents, such as one of the Gulf’s frequent underwater mudslides wiping out a cluster of wellheads on the seafloor, said Florida State University oceanographer Ian MacDonald.

That could trigger a blowout that would be harder to stop due to the damaged wellheads being possibly hundreds of feet deep in muddy debris, said MacDonald, who helped determine the magnitude of the 2010 spill.

In addition to having ships and barges standing by to capture oil that escapes from accidents, the industry has stockpiled chemical dispersants to break up oil and it can mobilize thousands of workers to clean up crude that reaches the shore.

But the heavy use of dispersants during Deepwater Horizon stirred controversy both over its effectiveness and biological effects. And scientists say the technology applied to shore cleanups remains as rudimentary as it was 10 years ago.

Crews relied heavily on hand tools such as shovels and absorbent paper towels sometimes called “oil diapers.” Much of the crude was deemed unrecoverable and left to break down over time.

“It’s something you could have done 100 years ago,” said Louisiana State University engineering professor John Pardue. “We’re still moving oil around with minimum wage workers with their hands.”