In its transformation from an obscure date to an iconic event on the world's retail calendar, Nov 11 offers a glimpse of how shopping, featuring product customization and diversified buyer groups, is shoring up the world's second-largest economy. 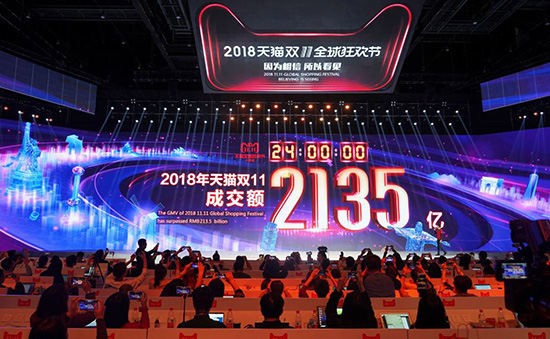 At a kickoff ceremony in Shanghai on Monday, Jiang said over 200,000 brands will be participating in the Nov 11 shopping extravaganza, with 1 million new products for sale and over 500 million users projected to join the mega shopping event, first launched in 2009.

"Nov 11 has historically proven to be a magnet driving consumption," said Jason Yu, general manager of consultancy Kantar Worldpanel. "Demand is most likely to be fueled by innovation and co-creation, meaning we would be anticipating more new product launches in the presale phase."

Presales have been brisk. Alibaba said seven brands broke the 100 million yuan ($14.1 million) threshold in the first 10 minutes of presales online. The company said it will recruit 400 new foreign brands for the campaign and debut 3,000 products exclusively on the platform.

Consumer insights generated from the wealth of data generated are lending a hand in incubating sought-after items, while virtual storefronts stand to offer personalized content and product promotions based on customer profiles.

The patronage of new groups of consumers is contributing to fresh vibrancy in the market. For the first time, Alibaba held a concurrent kickoff event in Harbin, Heilongjiang province, to tap into the wealth of shoppers from less influential but fast-developing cities and townships.

Over 70 percent of Alibaba's new active consumers came from lower-tier cities in the last quarter, according to its latest financial results. Jiang said these first-time buyers are forecast to spend 2,000 yuan per year via the site.

This demographic group is poised to be the next pocket for growth, thanks to their readiness for online shopping and ability to engage freely in discretionary spending, according to Wang Wei, a senior partner of McKinsey.

"The group tends to value social engagement, which could come in the form of referral programs, endorsements by influencers as well as special edition products," he said.

The festival is no longer an occasion for bargain hunters seeking budget items but instead is an opportunity to explore and become immersed in novel offerings, experts said.

"During last year's event, we launched a special recipe ice cream priced at 66 yuan, and all 20,000 pieces were snapped up in the first 10 hours of online sales," said Lin Sheng, founder and CEO of ice cream brand Zhongxuegao. "This shows that Chinese buyers are now willing to pay a premium for quality."

JD, another major e-commerce company, said last week it plans to access more than 500 million consumers in lower-tier cities and sell about 1.2 billion products at a lower price and 200 million customized products during this year's shopping bonanza.

As China's online spending rises, great hopes have been pinned on the sector amid the country's overall slowing economic growth, which dropped to 6 percent in the third quarter from 6.4 in the first quarter in terms of year-on-year GDP growth.

"As the internet of things and e-commerce services develop, China's online consumption has continued to maintain a high rate of growth," said Du Xishuang, head of the service statistics department of the NBS.