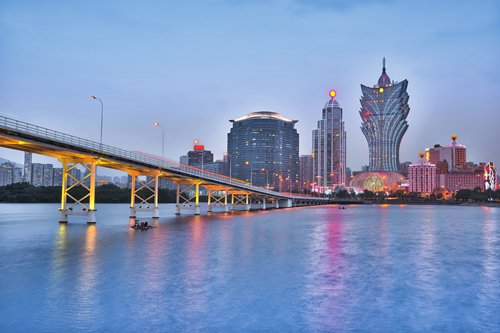 The skyline at night of the Macao Special Administrative Region, China. (Photo: IC)

This year marks the 20th anniversary of Macao returning to China.When thinking of Macao, many people still have the impression of "Las Vegas of Asia", but ignore its diversity as a special administrative region of China.Recently, at the invitation of Macao Government Information Bureau, the Global Times led a delegation of internet celebrities of different fields to visit the city.Coming from governmental organs, research institutes and universities, to the social organizations, delegates learned about the great changes Macao has gone through in recent years.Great advantage Macao is one of the most densely populated cities in the world.On its 32.9 square kilometers of land live about 653,100 people, according to the 2017 statistics on the website of Macao Government Information Bureau.Its range is about 1/6 of the Washington DC or 1/34 of Hong Kong.The results of the 2016 By-Census indicated that among the local population, 88.4 percent was Chinese, 1.4 percent was Portuguese, and 4.6 percent was Filipino.According to the Macao government, its per capita gross domestic product in 2018 was $82,609, the highest in China.Meanwhile, Macao received 35.8 million tourists in 2018.

While visiting Macao, the internet celebrities checked out Macao's latest strategic position and the cases of Macao participating in the construction of the Chinese mainland and actively embracing regional cooperation.Even though many of them have visited Macao before, they were surprised to find changes in the city.Gu Zhongyi, a dietitian, said that he was impressed by Macao's luxury during his brief stop in the city in 2012. "But this time I found that Macao also has its deep cultural heritage and I am surprised by its rapid development in technology."What activated Macao's vitality is the strategic position of the city in China's policy. Under the framework of "one country, two systems", Macao set goals during the 12th Five-Year Plan (2011-15) to become a world center of tourism and leisure and an important platform linking China and Portuguese-speaking countries (PSC) on economic and trade co-operation."Macao tourism soared over the past two decades," Cheng Wai Tong, deputy director of the Macao Government Tourism Office, told the visiting group. "Before Macao returned to China, there were only 7 to 8 million tourists here each year. Now, the number of tourists reached 10.35 million in the first quarter of 2019."As small as Macao is, it is a real international metropolis. It is closely connected with Portuguese-speaking countries, of which the population surpasses 260 million in total."The economic scale of Macao is not big, but it is highly outbound and taxes are relatively low," Casimiro de Jesus Pinto, deputy secretary-general of the Permanent Secretariat of the Forum for Economic and Trade Co-operation between China and Portuguese-speaking Countries, told the visiting guests. "Macao has a steady finance without special foreign exchange control and the position of having a free port and separate customs zone, which is a great advantage for Macao to develop foreign trade," he said.Bridging PSCNational flags of member countries lead the way to the office entrance of the Permanent Secretariat of the Forum for Economic and Trade Co-operation between China and PSC, also known as Forum Macao.As a multilateral trade platform with 15 years of history, the forum was initiated by China and partners with eight PSC, including Angola, Brazil, Cape Verde, Guinea-Bissau, Mozambique, Portugal, Sao Tome and Principe and East Timor.In 2018, the trade volume between China and PSC reached $147.35 billion, a year-on-year increase of 25.31 percent, according to the statistics from the General Administration of Customs of China.As one of the four core cities in the Guangdong-Hong Kong-Macao Greater Bay Area, Macao is also exploring its new role in the urban group.Victor Chan Chi Ping, director at the Macao Government Information Bureau, said that "Macao is the earliest origin of communication between Eastern and Western cultures and China's foreign relations."

"In the past 400 years, Macao has been serving as a significant role in Eastern and Western cultural communication. We hope to use the advantage and make it a key direction of Macao's future development."Openness and attraction Macao has formed a unique landscape that combines views from the East and the West: luxury modern hotels, Portuguese architecture in old town and old Cantonese buildings in the lanes. With the acceleration of Guangdong-Hong Kong-Macao Greater Bay Area construction, the openness and attraction of Macao is ever increasing.Chan, the director, said that gambling still contributes a lot to Macao's economy. But Macao people have been thinking to use the huge income from gambling to make preparations for the future to support the development of diversifying industries.The State Key Laboratory of Quality Research in Chinese Medicine of University of Macau was founded on January 25, 2011. It is becoming one of the features of Macao's economy.It aims at setting up the international standard for quality Chinese medicine. For the long term, the lab is expected to be an international cooperation center and model platform for the innovation of Chinese medical technology.Another laboratory in the University of Macau, State Key Laboratory of Analog and Mixed-Signal VLSI, is also leading the world.Meanwhile, the Macao government is also supporting the cultural industry, including the film, comic and fashion sectors. Every year, cultural projects receive a subsidy of about 68.6 million yuan ($10 million).Zhang Yiwu, a cultural expert from Peking University who has been to Macao many times, said that "compared with 10 years ago, cultural life in Macao has been more diverse. It is the result of Macao's social transition and upgrade".In 2017, Macao was designated as the "Creative City of Gastronomy" by UNESCO after Chengdu, Southwest China's Sichuan Province, and Shunde, South China's Guangdong Province.Closely connectedWhat touched the delegation the most was Macao's connection with the mainland.Congjiang county administrated by Qiandongnan Miao and Dong Autonomous Prefecture is one of the least developed areas in Southwest China's Guizhou Province and suffers deep poverty.In 2018, the Macao government and Liaison Office of the Central People's Government in Macao set Congjiang as its target for poverty relief.According to an agreement signed by Macao and Guizhou's Red Cross foundations, Macao would provide 12 million yuan in total to Congjiang as aid.

During their visit in The Handover Gifts Museum of Macao, the group encountered many local primary school students, who were there for the "national security education exhibition". More than 300 pictures and models of the BeiDou navigation satellites, the Liaoning aircraft carrier and Fuxing high speed trains attracted many visitors.Fernando Chui Sai On, Macao Special Administrative Region Chief Executive, said on many occasions that the obligation to recognize the concept of "one country" on national security issues was not at odds with the "two systems" principle.Only when the country is good can Macao be good, he said.