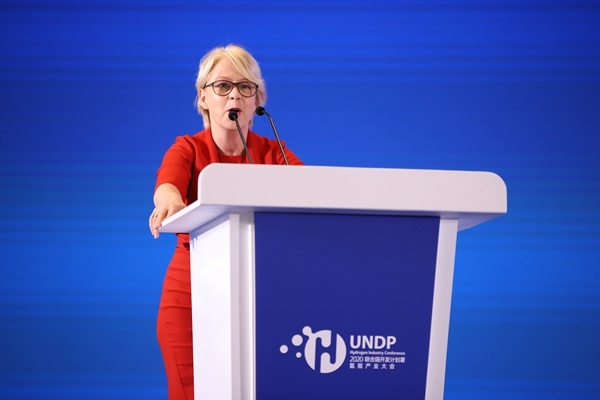 The 2020 UNDP Hydrogen Industry Conference opened in Foshan, Guangdong province on Oct. 19, in an attempt to strengthen international cooperation around hydrogen energy.

"Countries now have an opportunity to either invest in returning to yesterday's economy or to invest in tomorrow's economy and that means turning the page on the coal age, the oil age, on all fossil fuels," said Mourad Wahba, UNDP Associate Administrator in a video address. "A key element of this transition will be to further develop the hydrogen and fuel cell industries to help decarbonize our economies and to create a new green prosperous economy."

Beate Trankmann, UNDP Resident Representative in China, said, "Fuel cell vehicles and hydrogen technology play a growing role in the green path forward. The costs of hydrogen production and infrastructure are expected to drop by half by 2030, making it much more competitive."

Trankmann added that according to related studies, clean hydrogen is set to meet 24 percent of global energy demand by 2050, powering a quarter of the world's vehicles and potentially creating 30 million jobs.

UNDP has supported the demonstration and commercialization of hydrogen and fuel cell vehicles (FCV) in China over the past 17 years with backing from the Global Environment Facility (GEF) and in partnership with China's Ministry of Science and Technology. It also supports the use of hydrogen for combined heat and power (CHP) to reduce fossil fuel use in the country's energy mix, the organization says.