3 things to watch for from the Federal Reserve on Wednesday

The Federal Reserve is all but certain Wednesday to raise its key short-term interest rate for the third time this year and to signal that another hike is likely before the year ends. 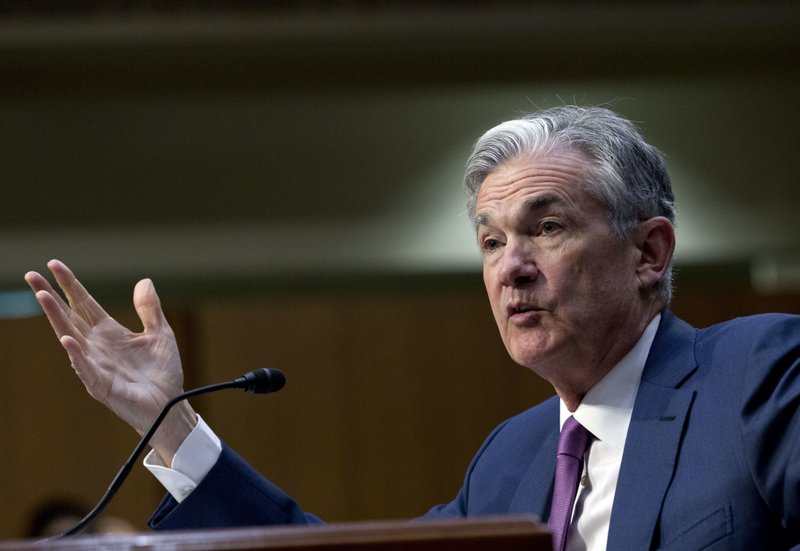 Federal Reserve Board Chair Jerome Powell testifies before the Senate Committee on Banking, Housing, and Urban Affairs on “The Semiannual Monetary Policy Report to the Congress,” at Capitol Hill in Washington on July 17, 2018. (File photo: AP)

But what about next year? Most economists foresee a slowdown in the nearly 10-year-old U.S. economic expansion as President Donald Trump’s trade war takes a toll and the benefits of tax cuts start to fade.

Will the Fed feel compelled to slow its rate increases? Or will it keep steadily tightening credit to ensure that a robust economy, with unemployment near a 50-year low, doesn’t ignite high inflation? Any clarity the Fed might provide Wednesday could come in a statement after its latest policy meeting ends, in economic and interest-rate forecasts it will issue or in a news conference Chairman Jerome Powell will hold.

Whatever the central bank’s policymakers decide will affect the loan rates that consumers as well as businesses will face in the coming months.

Here are three things to watch for after the Fed meeting ends Wednesday afternoon:

STATE OF THE ECONOMY

The economy, fueled in part by the tax cuts President Donald Trump pushed through Congress, has been sizzling. Growth clocked in at a brisk 4.2 percent annual rate in the April-June quarter — the fastest quarterly pace in nearly four years. Most economists have forecast that growth for 2018 as a whole will end up as the strongest in 13 years.

Unemployment, at 3.9 percent, is well below the 4.5 percent that the Fed had pegged as the level at which unemployment can remain for a sustained period without accelerating inflation.

Those forecasts will signal how the policymakers see the economy and interest rates evolving. A rosy picture would likely lead financial markets to brace for steady rate hikes to continue. Conversely, a dimmer forecast by the Fed could mean fewer rate increases in coming months and years.

In their previous forecasts in June, Fed officials predicted growth, as measured by the gross domestic product, of 2.8 percent for 2018 and then 2.4 percent in 2019 and 2 percent in 2020. Those levels fall shy of the sustained 3 percent growth rates the Trump administration has vowed to deliver with its tax cuts, deregulation and combative trade stance.

For inflation, the Fed in June had forecast 2.1 at the end of this year and for the next two years, just above its long-term 2 percent annual target.

In addition to its predictions for the economy, the Fed will update its “dot plot,” in which each member of its interest rate committee provides his or her anonymous forecast of where the Fed’s key policy rate will be in coming years. The dots will show where the officials expect the rate to be in the October-December quarter of each year.

The median dot — where half are above, half below — is closely watched for the Fed’s view of where its key rate may be headed. The rate now stands in a range of 1.75 percent to 2 percent. In June, the median was pegged at 2.4 percent for the end of 2018, up from 2.1 percent previously.

That shift was seen as the signal that the Fed was prepared to raise rates a total of four times this year, with the remaining hikes presumably coming this week and in December.

At the same time, the most recent dot plot signaled three rate increases for 2019. On Wednesday, that forecast could rise to four, reflecting optimism about continued economic strength. Or it could shift to just two, perhaps indicating concern that the economy will soon weaken.

Investors will also watch to see whether the Fed’s longer-run expectation for its benchmark rate remains at 2.9 percent. This is the level regarded as the Fed’s “neutral rate” — the point at which it would expect its policy to neither stimulate nor restrain growth.

Some Fed officials have argued that the strength of the economy may compel them eventually to move toward a restrictive level for its benchmark rate. The Fed is trying to achieve a “soft landing” for an expansion now in its 10th year. The goal is to slow growth enough to keep inflation in check but not so much as to hurt the economy. It’s a delicate task. Past Fed tightening cycles have sometimes ended in recessions rather than longer recoveries.

At Powell’s news conference, reporters will likely seek his views on the likely effects of Trump’s economic policies — from the tax cuts that are driving projected annual budget deficits above $1 trillion to the trade war he has triggered with China and other nations.

In the past, Powell has taken care to strike an even-handed response to such political questions. He has said that if Trump’s confrontational trade policy forces China and other nations to lower barriers to American goods, it will benefit the U.S. economy. But Powell may be pressed about concerns expressed in the Fed’s surveys of American businesses that a trade war will depress demand for their goods.

For his part, Trump has been openly critical of Fed policy, saying he was “not thrilled” by the prospect of further rate hikes and arguing that the Fed’s credit tightening “hurts all that we have done” in pursuing policies to boost growth. His publicly critical remarks, highly unusual for a president, alarmed Fed watchers who perceived an effort to apply pressure on the central bank.

Powell, who was Trump’s hand-picked choice to lead the central bank, may be asked to square the Fed’s plans for further rate hikes with the president’s comments.