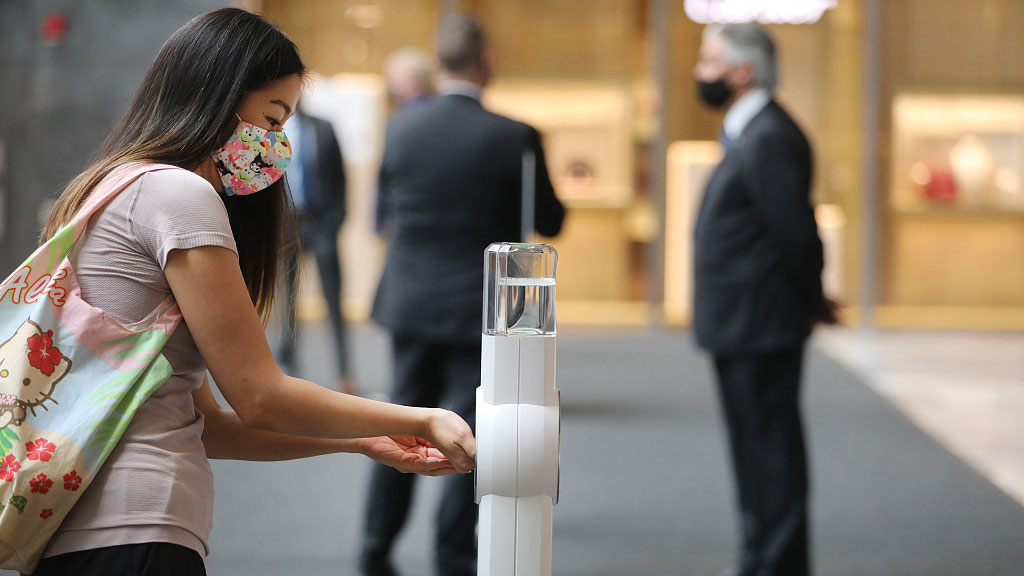 A woman sanitizes her hands at the mall at Hudson Yards on the first day of the reopening of malls to the public since the outbreak of COVID-19 in mid-March on September 09, 2020 in New York City. (Photo: CFP)

About 30 percent to 50 percent of New York City's restaurant industry is to close permanently in 2021 as a result of the COVID-19 which has ravaged the United States, said a recently released official report.

"Since March 2020, the restaurant industry has been hit very hard by the COVID-19 pandemic," said the report, adding that "Mandatory closures, stay-at-home and social distancing orders, the onset of a severe economic recession, and travel restrictions have resulted in unprecedented upheaval for the industry."

"As a result, many restaurants and bars have closed or significantly reduced their operations. Since these establishments often operate on tight margins in the best of times, there are growing fears that many will be forced to close permanently if financial support is not forthcoming," it added.

In March 2020, New York City became the epicenter of the pandemic in the nation, causing unprecedented effects, and by April, restaurant employment had dropped to 91,000 jobs as severe restrictions were imposed on business practices. As rules loosened and outdoor dining was permitted, employment rose, reaching 174,000 jobs in August, according to the report.

Since the pandemic began, many restaurants have explored new business models in order to generate revenues. Some establishments that had not offered takeout and delivery began those services. Others operated as specialty food markets offering items not available at local stores, said the report.

Still others sold do-it-yourself kits with menu items such as pizza and tacos, or offered gourmet meals requiring minimal preparation. With outside financial support to cover costs, some restaurants became food banks, it added.

"Another strategy involved obtaining permits for safe outside dining," said the report, adding that on June 19, 2020, the city started the Open Streets program, which issued special sidewalk and roadway permits.

"While the programs were slated to end in the fall, the Mayor intends to make them year-long and permanent," the report added.

In contrast with the pain caused by the pandemic, the latest annual figures unveiled in the report were something worth of relishing: in 2019 the city's restaurant industry reached its historical top, with 23,650 establishments, 317,800 jobs, 10.7 billion U.S. dollars in total wages paid citywide, and nearly 27 billion U.S. dollars made in taxable sales.