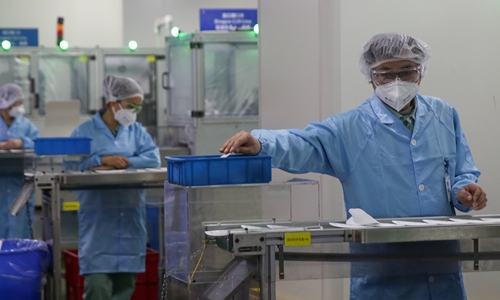 A 3M plant in China is working around the clock to produce hundreds of millions of respirators under a deal that the US-based tech giant signed with the Trump administration to import 166.5 million respirators in the second quarter primarily from China.

The plant, in Shanghai's high-tech Caohejing zone, is poised to fill most of the orders by the end of June. It is the only one of nine 3M plants in the Chinese mainland that makes face masks, including those for medical and industrial use.

The mask plant has been making respirators 24/7 since end of January, when the sweeping coronavirus outbreak in China raised demand for face masks and other medical supplies. 3M has donated epidemic-fighting products worth 7 million yuan ($0.99 million) to virus-hit areas in China.

But as the deadly virus is spreading globally, the 3M plant also sees its customer base shift from China and Asian countries to the US market.

"As the plant needs to concentrate its capacity on completing the US orders, its ability to supply respirators to local Chinese market will be constrained in April, May and June," a source close to 3M told the Global Times.

Production of the masks has been smooth so far, according to 3M, and the company received support from the Chinese government to solve logistics problems after the epidemic peaked in China.

On Monday morning, the Global Times saw that security guards were standing at the plant's entrance to ensure that everyone who entered had their temperature checked and obtained a green "health code."

According to the source, 3M has hired more laborers to cope with rising market demand. Compared with the pre-epidemic level, there are about 30 percent more employees involved in respirator production.

The shift in the customer base at the factory comes amid a surge in US infections in recent weeks. According to data compiled by John Hopkins University, 582,594 people in the US had been confirmed to be infected with the virus as of press time, the highest in the world.

The worsening pandemic, which resulted in surging medical supply orders for the US tech giant, has prompted 3M to ramp up respirator production worldwide. Since January, the company has doubled its global output to 1.1 billion N95 masks per year and it plans to raise global capacity further to 2 billion within the next 12 months, said 3M in a statement it sent to the Global Times.

3M also plans to increase production capacity at the Caohejing plant. The company's plant in the US state of South Dakota currently makes about 35 million N95 respirators a month.

Apart from face masks, 3M also produces pandemic-prevention products like disinfectant and protective gowns in China, and orders for the items have also risen. On Monday, a 3M employee at the protective suit assembly line told the Global Times that he works 12 hours every other day, but he felt that the workload has not changed much over the course of the epidemic.

The mass supply of face masks from 3M's mainland plant to the US is an example of China's strong manufacturing capability, a situation that goes back many years, although worries have arisen lately as to whether the pandemic will induce some countries to decouple their industrial base from China.

"It's hard to say if foreign companies will 'decouple' from China economically under political pressure. But if they can choose for themselves rationally, they must choose to produce in China because of its low labor costs, complete industry chain and improving business environment," said Bai Ming, a research fellow at the Chinese Academy of International Trade and Economic Cooperation.

Bai said that the current division of labor benefits both China and the US, and their business ties will only become closer in the long run.

The 3M source also disclosed that the company's overall business in China has been affected by the epidemic, aside from such medical products as face masks, because personal protection equipment only accounts for a small portion of 3M's more than 60,000 products ranging from adhesives to car coating.