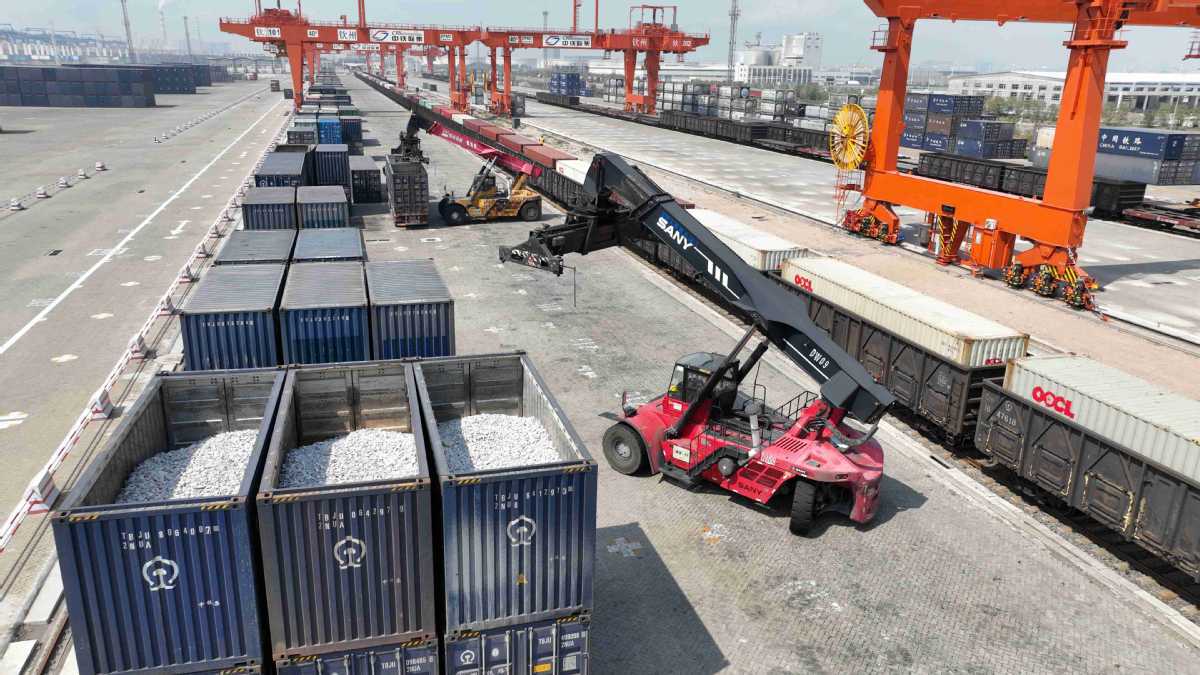 Loaded with goods such as auto parts, chemicals and Chinese pickles from regions along the land-sea freight route, part of the New International Land-Sea Trade Corridor, X9575 transfers at the Qinzhou Port where the cargo will be shipped to the Association of Southeast Asian Nations (ASEAN) countries.

"It used to take about a month for commodities from our western regions to reach ASEAN countries via the Yangtze River and sea route," said Liang Yu, deputy head of the station.

Now cargo consigned in Chongqing could be delivered to Vietnam through the corridor in just four days, Liang added.

Launched in 2017, the New International Land-Sea Trade Corridor is a trade and logistics passage jointly built by western Chinese provinces and ASEAN countries.

With Chongqing as the transportation hub, the corridor uses ports in Guangxi's Beibu Gulf to reach ports in Singapore and other ASEAN countries and links China-Europe freight trains setting off from many western Chinese cities before heading to Central Asia, South Asia and Europe.

The corridor saw 379,000 twenty-foot equivalent unit (TEU) containers transported by the railway intermodal freight trains in the first six months of this year, up 33.4 percent year-on-year, according to the China Railway Nanning Group Co Ltd.

The corridor, covering 14 provincial-level regions in China, has expanded its reach to 319 ports in 107 countries and regions.

Speaking of the corridor at the 12th Pan-Beibu Gulf Economic Cooperation Forum held in Nanning, capital of Guangxi, earlier this month, Basilio Dias Araujo, deputy for Maritime Sovereignty and Energy, Coordinating Ministry for Maritime Affairs and Investment of Indonesia, said it has brought more opportunities to the connectivity between China and ASEAN.

Basilio added that as a maritime country, Indonesia is also happy to join the construction of the corridor, and strengthen cooperation with ports along the route, including the Beibu Gulf Port.

The Beibu Gulf Port, which comprises the ports of Qinzhou, Fangcheng and Beihai, serves as an important transit point in the New International Land-Sea Trade Corridor. In H1, the port saw its cargo throughput rise 6.95 percent year-on-year to 139 million metric tons. During the same period, the port handled 3.2 million TEU containers, up 21.4 percent year-on-year, according to Beibu Gulf Port Group.

SITC Container Lines Co Ltd experienced a business boom in the Beibu Gulf Port thanks to the rapid development of the corridor and deepening China-ASEAN trade cooperation.

In April, China's Gansu province signed a memorandum of understanding (MoU) with Thailand to boost trade and strengthen bilateral relations.

Jurin Laksanawisit, Thai deputy prime minister and commerce minister, said that Gansu is an integral part of the corridor, and the signing of MoU fully reflects Thailand's expectation to further develop the economy within the region and achieve common prosperity through the corridor.

Official data show that over the past five years, the trade volume between the regions and cities along the corridor in China with ASEAN has continued to rise, up from $58.9 billion in 2017 to $107.7 billion in 2021.