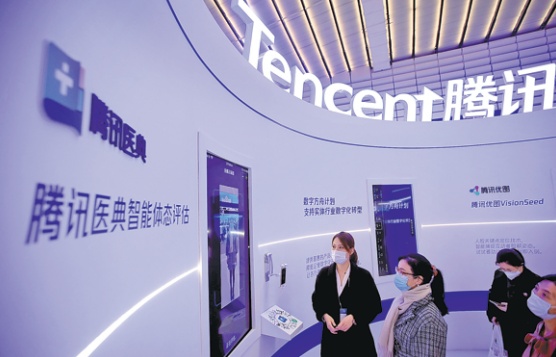 The booth of Tencent Holdings Ltd during an expo in Wuzhen, Zhejiang province. (Photo: China Daily)

China ranks second after the United States in terms of wealthy non-State-owned companies, and their combined wealth rose by 25 percent despite the novel coronavirus epidemic, a new study said on Tuesday.

A total of 51 Chinese companies made it to the latest Hurun Global 500 List, which tracks the world's richest non-State-owned companies. The US led the rankings with 242 companies.

The first-ever such list includes publicly-traded firms based on market capitalization and valuations of non-listed companies. US-based tech giant Apple Inc took the top slot with an estimated value of $2.1 trillion.

Despite the lingering COVID-19 epidemic, Hurun said the total value of the companies rose by 25 percent from a year ago with the cutoff date being on Dec 1. Among the 60 companies that doubled in value, 25 came from the US and 21 from China.

"COVID-19 put rocket fuel under an already powerful tech boom, resulting in a concentration of massive economic power," said Rupert Hoogewerf, chairman and chief researcher of Hurun Report. "The Top 10, for example, were worth $10 trillion, accounting for 20 percent of the Hurun Global 500."

Companies from the Hurun Global 500 List were founded in 1956 on average, with collective sales last year of $38 billion and 86,000 employees on their payrolls. Together they were worth a massive $50 trillion, equivalent to the combined GDP of the world's six largest economies or 60 percent of the global GDP.

China's 51 companies had a combined value of $5.2 trillion, more than the combined total of the next three countries of Japan, France and the UK. They were led by Tencent Holdings Ltd which was worth $712 billion and Alibaba Group Holding Ltd, the only two non-US companies in the Top 10 list.

Electric cars, healthcare and e-commerce saw the fastest growth, with electric carmakers like Nio, Xpeng Motors and Tesla among the biggest gainers in terms of percentage growth.

The list had 61 startups that were set up in the 2000s, with e-commerce platform Pinduoduo, which was established in 2015, the youngest in the list.

The pandemic boosted the value of vaccine producer Moderna nearly sixfold to $55.4 billion. It also gave a fillip to e-commerce firms led by Pinterest and Pinduoduo, as well as food delivery companies DoorDash and Meituan.

Meanwhile, the biggest losers due to the epidemic were energy companies, as oil prices declined by 23 percent. Exxon-Mobil, formerly the most valuable company in the world, saw its value fall by 44 percent to $163 billion, while its ranking stood at 61. Airplane manufacturers and traditional financial services companies also lost ground.

Jiang Nanchun, head of digital media consultancy Focus Media, said Chinese brands will take more spots on the list and excel in the long run given "their agility and adaptability to changing market needs amid global economic uncertainties".