Shipments of 5G smartphones are set to increase in China, as the intensified push to expedite the rollout of the superfast wireless technology will help revive handset sales, analysts said on Monday. 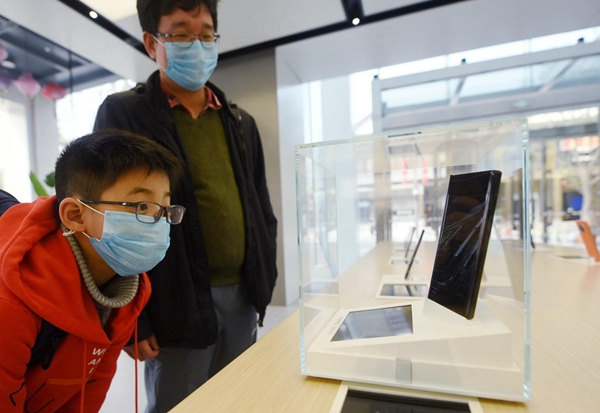 Li Huaibin, a senior analyst at Omedia, a global telecom research and consulting institute, said although the novel coronavirus outbreak is affecting 4G smartphone sales, it would have little impact on 5G phones.

The comments came after shipments of phones declined 56 percent year-on-year to 6.38 million units in February, as the epidemic affected the sales and plants' production capabilities, the China Academy of Information and Communications Technology, a government think tank, said in its latest report.

Despite the plunge, the combined shipments of 5G smartphones in January and February reached 78.4 million units, accounting for 28.8 percent of all handsets shipped, the report said.

Smartphone vendors including Samsung, Huawei, Oppo, Xiaomi, Vivo, Realme and Black Shark all released their flagship 5G smartphones in the past two months, mainly targeted at the high-end market.

According to GFK, an international market research institute, global 5G smartphone shipments are expected to reach 170 million units this year, with China accounting for 110 million units, or 65 percent of the global shipments.

Liu Zuohu, CEO and founder of smartphone vendor OnePlus, said the company's next generation of smartphones will all be powered by 5G.

Last year, OnePlus' 5G smartphones accounted for 11 percent of the US 5G smartphone market, which is still in its early stages, according to data from market research agency Counterpoint.

As China accelerates the construction of 5G networks this year, more cities will be covered with the superfast technology, which will spur consumers to quickly upgrade their devices, analysts said.