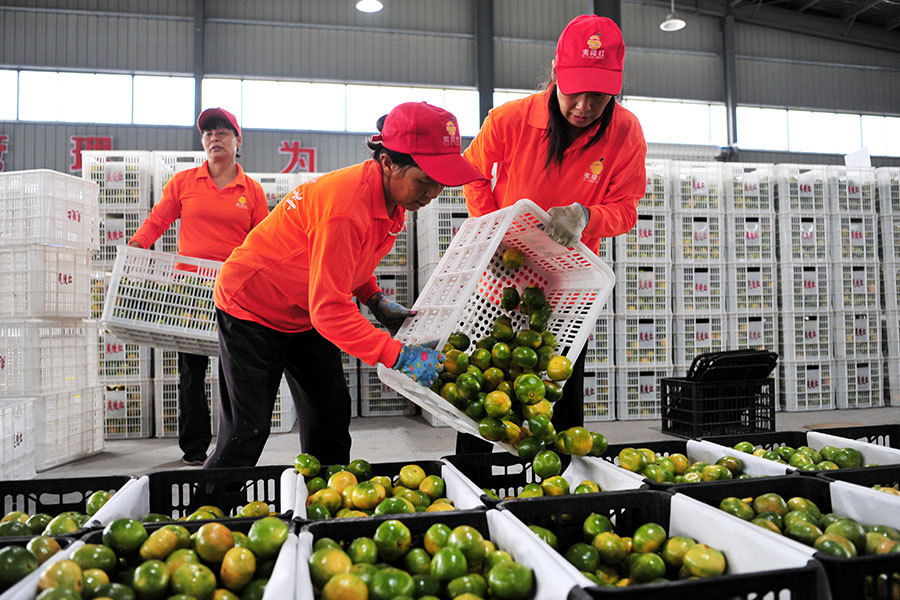 Agreements worth $82 million were inked by six companies from Yichang, Hubei province, for the sale of 110,000 metric tons of citrus fruits and related products to foreign purchasers during a recent online event.

The 103 buyers, from 27 countries and regions involved in the Belt and Road Initiative, inked the deal at the 2020 Yichang International Citrus Online Trade Fair, on Wednesday, the first time that the event is being held online due to the COVID-19 pandemic.

Zhang Jiasheng, mayor of Yichang, said the event is part of the city's efforts in matching production and sales, strengthening international trade cooperation and furthering opening-up despite the novel coronavirus epidemic.

Yichang, as a major production center of citrus fruits in China, has three geographical indication citrus fruits such as Zigui navel orange and other renowned citrus brands, which are sold to, and loved by, customers worldwide, he said. The total output value of the citrus fruit industry in the city is about 14 billion yuan ($2.08 billion), he said.

Zhang said he expects the fair to make Yichang and its citrus fruits more known to international customers.

Before the event, three online trade fairs were held for major citrus fruit exporters in the city and global purchasers, which achieved tangible results, according to local authorities.

Li Daxiao, chief economist at Yingda Securities, said the huge export volume at the fair has great significance for the city's economy, and will be an example for other regions to continue promoting exports during the pandemic by making use of online platforms and seizing the huge BRI opportunities.

Zhou Mi, a senior researcher at the Chinese Academy of International Trade and Economic Cooperation in Beijing, said Yichang's export of citrus offers great lessons to other cities, especially to second-or third-tier cities, in terms of how to leverage strengths from local pillar industries and boost the economy.

"The online trade fair also played an important role in Yichang's successful export of citrus fruits since the pandemic. Today, traditional industries are set to ride the tech wave. It is of great importance for both governments and companies to use tech tools to seek new opportunities in trade and economic development," Zhou said.

According to Zhou, the Belt and Road Initiative, as a flagship project to promote global trade and investment, has been promoting communication and cooperation at city levels and has offered a great platform for trade to not only large-sized, but also small-and medium-sized companies, which will help boost the regional economy for the related countries and regions.