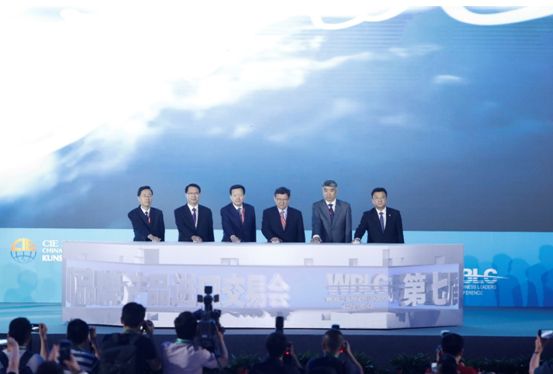 As a major forum of the 2018 China Import Expo (Kunshan) that kicked off on May 16, 2018 in Kunshan, Jiangsu province, the Seventh World Business Leaders (Kunshan) Conference was held with the theme of "Sharing Wisdom, Innovating the Future," focusing on innovation and development, highlighting smart manufacturing, actively promoting cooperation in the global business community, jointly exploring new trends of investment and development in world trade, as well as sharing new opportunities for world economic development.

At the opening ceremony, Chen Zhou, vice chairman of the China Council for the Promotion of International Trade (CCPIT), delivered an opening speech to representatives from more than 40 countries and regions on behalf of the CCPIT, outlining the roadmap for the global business community to "consult on cooperation plans, build a cooperation platform and share cooperation achievements." Chen also called on trade promotion agencies around the world to actively remove obstacles in the cross-border flow of goods and services, simplify trade procedures, eliminate trade barriers, reduce trade and investment costs, promote the establishment of a global facilitation system, and increase the speed and quality of regional economic cycles, to achieve mutual benefit and win-win situations.

Guo Yuanqiang, vice governor of Jiangsu Province, paid tribute to the breakthroughs made by the China Import Expo (Kunshan) and the new progress made by the World Business Leaders (Kunshan) Conference in his speech at the opening ceremony. Guo pointed out that in the new era, Jiangsu will adhere to the guidance of Xi Jinping Thought on Socialism with Chinese Characteristics for a New Era, firmly establish and consciously practice the new development philosophy; comprehensively deepen reform and opening up, work hard to promote the formation of a new pattern with comprehensive opening up; vigorously push forward the construction of the Belt and Road Initiative, accelerate the creation of new advantages for an open economy, and strive to promote the high-quality development of Jiangsu Province as the forefront of the country.

Long Guoqiang, deputy director of the Development Research Center of the State Council, also noted in his speech that the Chinese economy has moved from a high-speed development stage to a high-quality development stage. For enterprises, this is not only a challenge, but will also give birth to new development opportunities.

Rajesh Aggarwal, chief of Trade Facilitation and Policy for Business under the United Nations' International Trade Center (ITC), said the global challenges people face today cannot be solved alone, nor can they be solved by one country, and they require the close cooperation among all countries in the world.

Roger Fisk, a world-renowned strategist who plays a key role in the back-to-back electoral victories of President Obama, said how a culture of innovation played an important role in Obama's campaigns. He also systematically introduced the development trends of automation, artificial intelligence and the internet which everyone in the world should pay attention to.

Qin Yang, an expert committee member of the CCPIT, vice chairman of the Customs and Trade Facilitation Commission under the International Chamber of Commerce China and managing director of CC International Consulting Limited said to reporters that in the face of a complicated international economic and trade environment where the world economy is slowly recovering, while trade protectionism and unilateralism is starting to emerge and spread, "the global business community should further shape new concepts of cooperation and win-win, gather positive energy of innovative development, and inject new and strong driving forces into global industrial and commercial development."

During the meeting, cooperation and win-win beneifts became a common consensus, and technological innovation triggered deep resonance. The attending guests positioned themselves alongside the three modules of "enjoying new opportunities for world development," "creating a new future for global business," and "combining new trends in thoughts of industry leaders" to present a feast of ideas to the representatives of the business community.

As an important new mechanism, this conference offered a guest dialogue session for the first time. The guests discussed a series of hot topics including economic globalization, China-U.S. economic and trade relations and a "trade war" with an open mind and insightful opinions while sharing innovative practices and seeking cooperative development.

The Seventh World Business Leaders (Kunshan) Conference attracted a record more than 800 participants from more than 40 countries and regions.