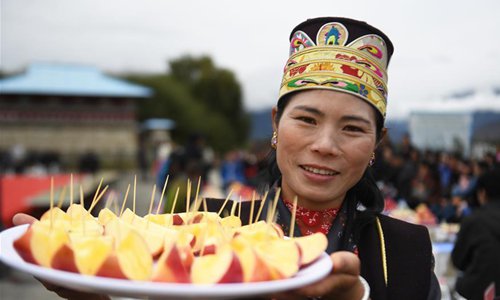 Beijing has supported 86 projects in Lhasa, Southwest China's Tibet Autonomous Region this year, and 80 percent of the financial aid was used to improve local residents' livelihood and the infrastructure construction in Tibet, chinanews.com reported on Wednesday.

Liu Wenju, an official from the directorate on Beijing's aid to Tibet, was cited by chinanews.com as saying the focus of the aid work is to improve Tibetan residents' livelihood and increase employment to lift more people out of poverty.

Beijing has spent more than 137.75 million yuan on projects on people's livelihood, including giving free medical treatment to patients with altitude sickness and improving the living infrastructure constructions of a poverty-stricken village.

For the cultural and tourism fields, Beijing has provided 30 million yuan in building projects, including a leisure area and a cultural square.

Located 4,000 meters above sea level, Tibet is one of the main grounds in China's nationwide battle against poverty.

The region has made great progress since anti-poverty campaigns began, the Xinhua News Agency reported.

Aid from other provinces has helped shore up industries to achieve anti-poverty targets. Funds, talent, and expertise from developed cities like Shanghai have helped Tibetans set up high-end factories rather than low-end ones, authorities said.

China Development Bank has issued 52.3 billion yuan of loans to impoverished counties in Tibet, benefitting over 400,000 people, according to Xinhua.