The first stock trading day following the change of the head at the China Securities Regulatory Commission (CSRC), China's securities watchdog, the A shares had an auspicious start which reflected investors' confidence and expectations for the markets. 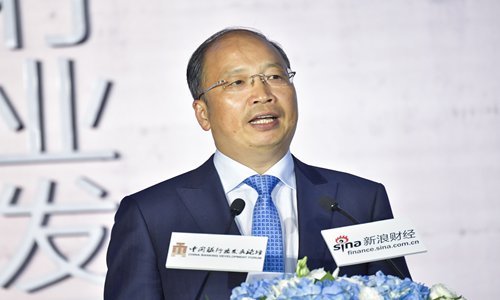 Yi Huiman,  then chairman of Industrial and Commercial Bank of China, delivers a speech during the 2017 China Banking Development Forum in Beijing on August 24, 2017. (Photo: IC)

As of the end of the morning session, the Shanghai Composite Index rose by 0.32 percent to 2,610 points, while the Shenzhen Component Index rose by 0.57 percent to 7,639. points. A total of 18 stocks rose to their daily trading limit of 10 percent across the two bourses. Banking stocks showed good performance in the morning session, with shares of the Industrial and Commercial Bank of China (ICBC) rising by 0.72 percent as of press time, while Bank of China saw its shares rise by 0.55 percent.

The A-share markets got off to a flying start after Yi Huiman, the former chairman of the ICBC, took office as new head of the CSRC to replace Liu Shiyu.

Liu's new position is deputy Party secretary of All China Federation of Supply and Marketing Cooperatives, according to the official website of the federation.

The A-share investors' reaction to the CSRC head change shows the hope that investors had that the new leader would bring a new beginning for the A share market, experts said.

"Currently, the A-share markets are bottoming out. Overseas capital is increasingly flowing as 'bottom fishing', demonstrating that the A-share markets are already displaying their value for medium-term and long-term investment. The change of the CSRC head at this time, shows the government's inclination to 'care for' the market, while trying to inject confidence and support for the markets," Yang Delong, chief economist at the Shenzhen-based First Seafront Fund Management Company, told the Global Times on Monday.

But Dong Dengxin, director of the Finance and Securities Institute at Wuhan University of Science and Technology, cautioned that although investors had looked for a new leader (to rally the markets), it's unlikely that the problems of A-shares would fundamentally change in the short term, just because of the change of the CSRC head.

"A-share reform measures, like nurturing of institutional investors and the removal of overly administrative intervention, are unlikely to be resolved in a very short term," he told the Global Times on Monday.