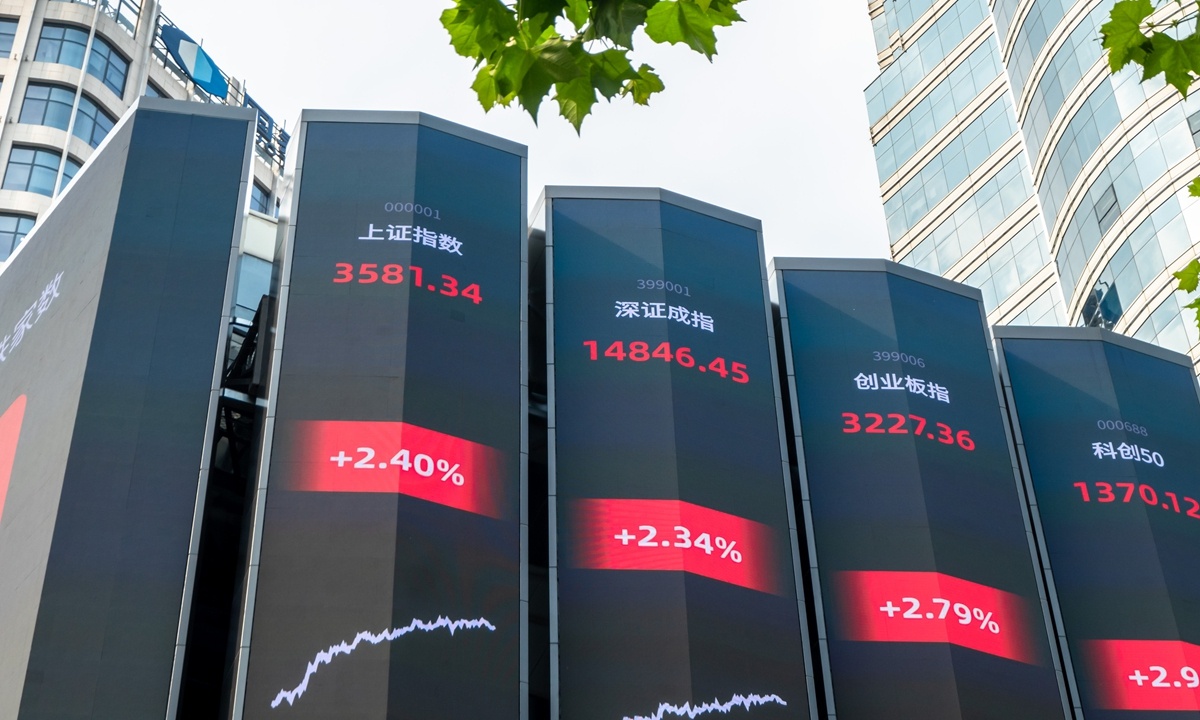 Chinese mainland stock market posted a stellar rally on Tuesday, with the flagship Shanghai Composite Index finishing up 2.4 percent at 3,581.34 points. The gain was spurred by record net inflows into the A-share market via northbound trading linkups between the mainland and Hong Kong bourses as the Chinese yuan gained strength.

The Shanghai index, the Shenzhen Component Index and the tech-heavy ChiNext index all closed at roughly their intra-day highs, while the daily trading volume topped 1 trillion yuan ($156.2 billion), the highest in nearly three months.

Rallies like this have been rare over the past two months. The difference this time was a record daily net inflow of 21.72 billion yuan into the market via the northbound trading channel.

The amount shattered the previous record set on November 26, 2019 of 21.43 billion yuan when the Shanghai benchmark edged up 0.03 percent.

Shanghai-listed Kweichow Moutai, the world's most valuable distiller, sat atop the net inflow rankings with 2.47 billion yuan in net purchases of its shares on Tuesday.

The new record, an enormous rise from the previous day's 1.89 billion yuan in net inflows, was linked to a stronger yuan, which attracted foreign investors to yuan-denominated A shares as a buffer against other currencies' weakness, analysts said.

The yuan's daily fixing was set at 6.4283 against the US dollar on Tuesday, strengthening from Monday's 6.4408, official data showed. The offshore yuan rose above the 6.4 mark intraday on Tuesday, the highest since June 2018.

Excessive attention shouldn't be attracted to the net inflow readings, which don't give a full picture of the market's dynamics, said Dong Shaopeng, a senior research fellow at the Chongyang Institute for Financial Studies of Renmin University of China. Rather, it makes more sense to analyze the breakdown of Tuesday's rally.

A registration-based IPO system will boost brokerages' business, and a growing trend of mergers and acquisitions amid the economy's rebalancing will serve as a shot in the arm of brokerages that facilitate company reorganizations.

But Dong warned that A shares won't rise in a straight line, with the Shanghai index possibly fluctuating between 3,500 points and 3,700 points for quite a long time.

"Over the next year or two, there's a chance of the benchmark index hitting the 4,000-point mark - assuming the absence of such non-economic factors as geopolitical uncertainty," said Dong, who is also an expert advisor for the China Securities Regulatory Commission.

US stocks are overbought and the US market is on the cusp of a correction, although the exact timing is uncertain. A shares may inevitably be affected, but the pain won't be severe, he said.