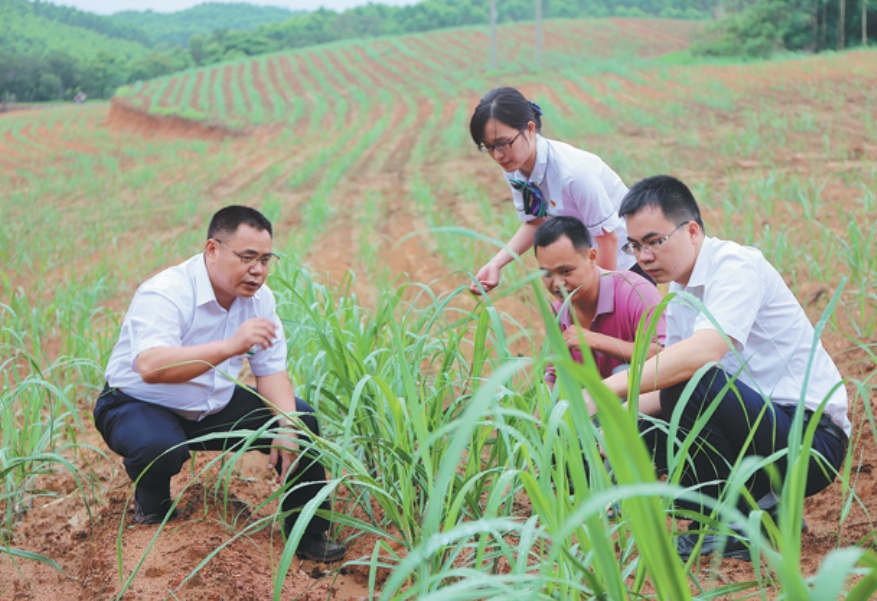 Agricultural Bank of China Ltd, a State-owned commercial lender, made an all-out effort toward the nation's final push to help secure a decisive and complete victory in poverty alleviation, its executives said.

By the end of September, the outstanding balance of ABC's loans was 1.26 trillion yuan ($187.28 billion) in 832 key counties of national poverty alleviation and development efforts, up by 172.3 billion yuan from the beginning of this year.

Guangxi Yangpu Nanhua Sugar Industry Group Co Ltd is one of ABC's beneficiaries. It produces 1.6 million metric tons of sugar a year, accounting for 16 percent of the total sugar production in China.

Since 2015 when the world's second-largest economy announced a war on poverty, ABC's branch in the Guangxi Zhuang autonomous region has issued 8.75 billion yuan of loans to 11 sugar plants of the Yangpu Nanhua group in seven State-level poverty-stricken counties.

The loans helped the group to mobilize about 500,000 farmers to grow sugarcane. People in these counties are now out of poverty, said Jiao Nianmin, executive vice-president of the group.

"The customized financial services ABC provided to our group strengthened our support to poor sugarcane farmers. We hired more poor farmers to work at our sugar refineries and built a stable relationship with poor sugarcane planters by placing orders (for their produce)," Jiao said.

Thanks to the bank's support, Yangpu Nanhua helped over 11,000 documented poor households in recent years. ABC also offered unsecured loans, which are issued and supported only by the borrowers' creditworthiness, to qualified rural households after verifying the list of sugarcane planters provided by the Yangpu Nanhua group.

Baise-based farmer Ruan Zhongge, the sole breadwinner of his family of seven, had been under severe financial stress until he received an unsecured loan of 12,000 yuan from ABC at a favorable lending rate.

With the loan money, he rented 0.53 hectare of land to plant sugarcane. Last year, his family earned an income of nearly 20,000 yuan and emerged from poverty.

The bank also served as a coordinator of the poverty alleviation program by introducing high-quality companies from maritime China to poverty-stricken regions in the western part of the country.

In the past, the farmers had to sell their walnuts at a low price of 4 yuan to 6 yuan per kilogram as they did not find a big enough market.

To help the farmers with walnut processing, marketing and sales, ABC's branch in East China's Zhejiang province introduced 11 companies in Zhejiang to conduct an onsite investigation in Liangshan. One of them eventually signed a cooperation agreement with the local government after multiple investigations.

With a total investment of 500 million yuan, a walnut oil processing project will be officially launched this month in Xichang, a city in the Liangshan Yi autonomous prefecture.

It is estimated that the project, through partnerships between eastern and western China, will increase the income of more than 200,000 people in 11 poverty-stricken counties, said Min Yunzhong, 59, leader of the poverty alleviation working group in Liangshan and also an employee of ABC's Zhejiang branch.

The working group facilitated an investor to register a company in Liangshan, choose a business location, order equipment and build a plant. It also helped the investor seek preferential policies and solve problems caused by regional cultural differences, said Min.

Since the bank started a special action plan to promote east-west partnerships for poverty alleviation in 2019, it has introduced 32 projects with a total investment exceeding 1.52 billion yuan in the areas of extreme poverty and a few targeted poverty-alleviation counties.