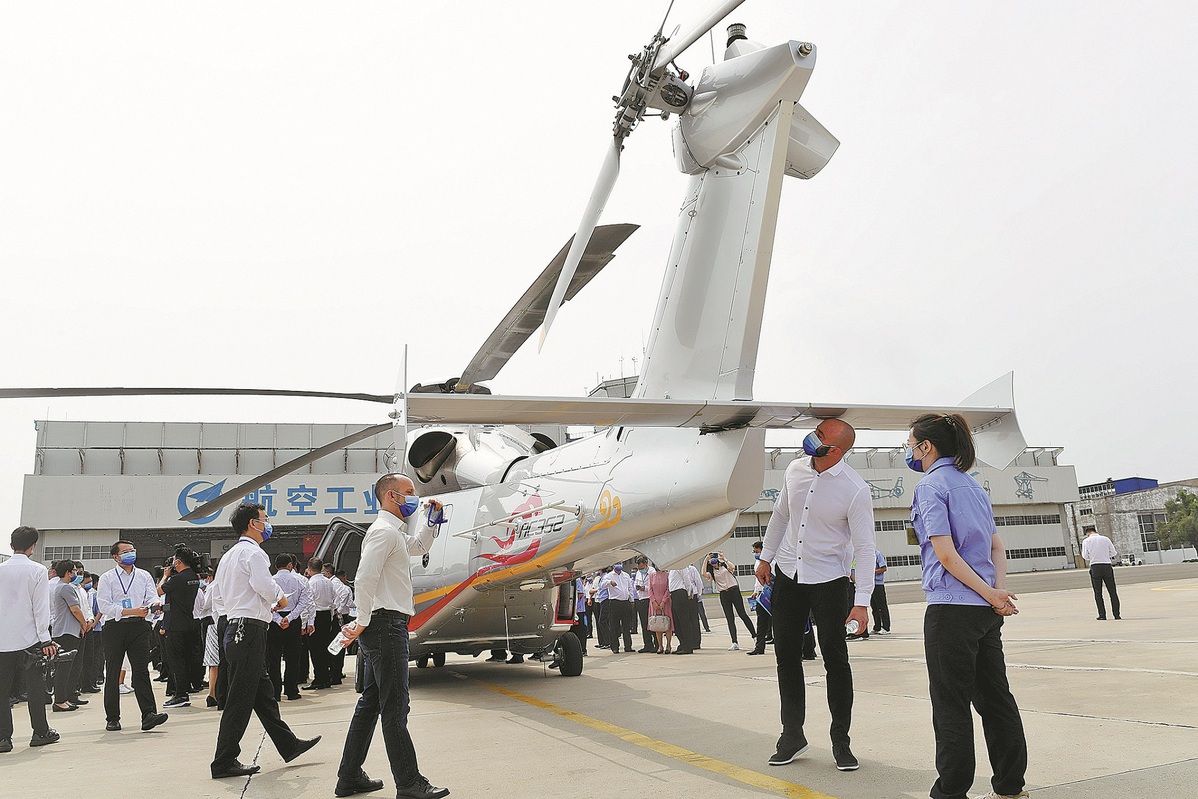 An AC352 medium-lift utility helicopter is displayed at its certificate-issuance ceremony in Harbin, Heilongjiang province, on Tuesday. [Photo by LIU YANG/FOR CHINA DAILY]

The AC352 medium-lift utility helicopter has been cleared for commercial operation in China, with project managers seeing big potential in a wide range of public service and business fields.

At a certificate-issuance ceremony in Harbin, capital of Heilongjiang province, the Civil Aviation Administration of China conferred the type approval certificate to Aviation Industry Corp of China's Harbin Aircraft Industry for the AC352, also known as the Z-15.

This marked the successful completion of the helicopter's research, development and test flights, giving it a green light for mass production and delivery to users, according to AVIC.

Yin Shijun, chief engineer at the aviation administration, said at the ceremony that the AC352 has put an end to the absence of a domestically built, medium-lift civilian helicopter and will strongly improve the country's general aviation industry and its emergency response system.

He urged AVIC to continue to develop variants of the AC352 and collect and compile know-how and experience from test flights and certification to facilitate the research, development and testing of other helicopter models.

The AC352, China's first 7-metric-ton-class helicopter, was co-developed by AVIC and Airbus Helicopters.

Work began on the helicopter in 2006 and it made its first flight in December 2016 in Harbin.

Propelled by two turboshaft engines, the helicopter has a maximum takeoff weight of 7.5 tons, a maximum carrying capacity of 3 tons and a cruising speed of about 280 kilometers per hour. It can fly up to 850 km on a single flight, according to AVIC.

The State-owned aviation conglomerate said the AC352 is one of the most comfortable and environmentally friendly medium-sized helicopters in the world.

Operated by two pilots, it can transport up to 16 passengers inside its 12-cubic-meter cabin.

Lu Weijian, chief designer of the AC352, said the aircraft has advanced technologies and world-class capability and is able to undertake many tasks such as search and rescue, personnel transportation, medical airlift and chartered flights.

"For instance, helicopters in the 7-ton category are most suitable for search-and-rescue operations. The AC352 is capable of flying in strong wind and can stay in the air for a long time. It can also be used to extinguish fires in remote areas," he said.

The designer said the helicopter can meet the operational requirements of various industries in the next three to four decades.

The first mass-produced AC352 is scheduled to be assembled around the end of this year and will be delivered to a government user in 2024.