Acer Inc unveiled its first line of high-end laptops running Google's Chrome OS on Wednesday, as the computer maker looks to help Google in its effort to win over business users after taking the US education market by storm. 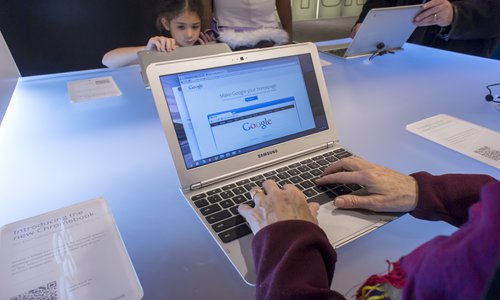 A customer at the Wired pop-up store in New York examines a Samsung Chromebook laptop in December, 2012. (File photo: IC)

Chromebooks, as the devices are called, are known for running cloud-based applications and storing data online. Simple, cheap and with long-lasting batteries, they have become a popular option for students and children.

Devices made by Acer, HP Inc, Dell Inc and others, including Google itself, have taken nearly 60 percent of the US grade-school market in the seven or so years since they appeared.

The new Acer machines are part of the latest step in Google's long-term strategy to conquer the lucrative business market, where personal computers running Microsoft Corp's Windows operating system still account for 90 percent of the market.

Google, a part of Alphabet Inc, is pushing Chromebooks because they help draw customers to its cloud computing services and G Suite workplace software bundle - a rival to Microsoft's Office - both of which are key to the company's efforts to diversify revenue.

Chromebooks' difficulties in running complex applications have so far limited their appeal to businesses, but that could change soon.

"Chromebook from the gate has been that just-good-enough for your grandma device," said Linn Huang, research director at technology advisory firm IDC. "They are still leaps and bounds behind, but this year and next year Google will make massive corrections to close the gap."

Acer, which IDC estimates was the No.2 Chromebook vendor in the US last year, will outfit its new line with large, hardened screens, aluminum bodies and Intel Corp's top-flight 8th Generation processors, said Gregg Prendergast, president of Acer Pan America.

He declined to specify prices, but said they would be higher than the typical $300 Chromebooks aimed at students.

Google, which makes its own $1,000-and-up Pixelbook, is working with other hardware manufacturers to launch other top-tier Chromebooks this year. Since August, Google has charged businesses $50 per laptop per year for a management license. Its education plan costs $30 annually.

Chromebooks' adoption in schools has shown businesses that the devices are easy to secure and manage, according to Huang, but their "low horsepower" has limited use to fast-food outlets, shops, banks, health clinics and similar situations where a single lightweight and mobile device is shared by many employees.

Google has upped the capabilities of its software and increased the number of its authorized sales partners by 25 percent over the last year in an attempt to persuade business users that Chromebooks can handle more complex tasks.