BUSINESS Advance pay service may reduce use of payday loans

Advance pay service may reduce use of payday loans 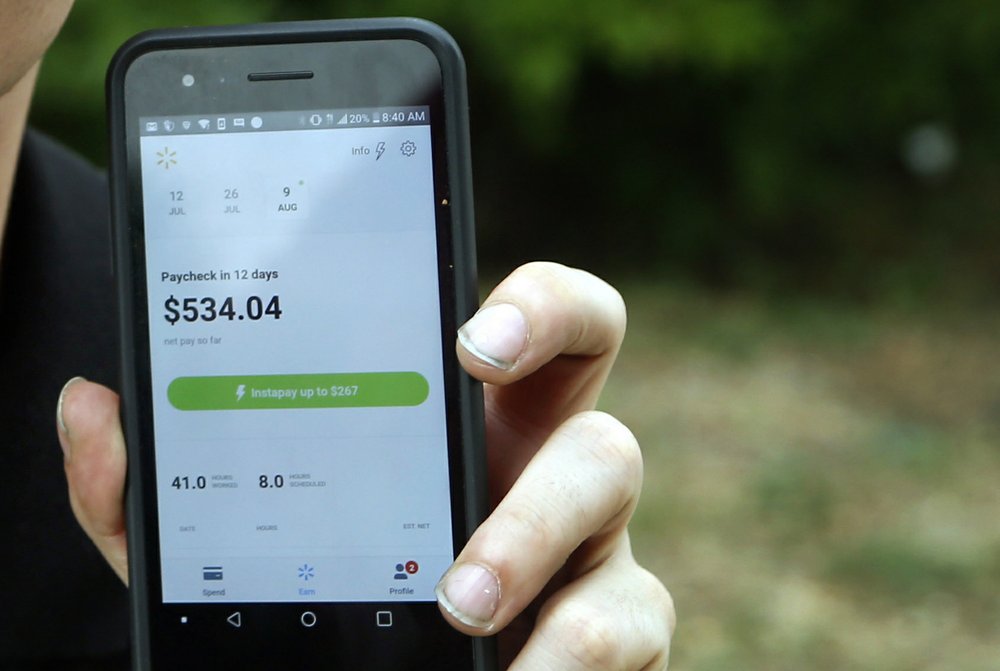 FILE- In this July 28, 2018, file photo, Luis Vazquez, an overnight support manager at Walmart in Dallas, poses for a photo with the Instapay app, developed by technology company Even, that assists him with his finances. Along with providing tools that allow employees to track their spending and save money, Even features Instapay, which allows users to advance some of their next paycheck up to 13 days before payday. (Photo: AP )

Americans take out roughly $50 billion in payday loans a year, each racking up hundreds of dollars in fees and interest. But a small and growing service that allows its users to take an advance on their paycheck might be giving the payday loan industry a run for its money.

San Francisco-based financial technology company Even made headlines late last year when Walmart, the nation’s largest private employer, announced it would start offering Even’s service as part of its employee benefits package. Along with providing tools that allow employees to track their spending and save money, Even features Instapay, which allows users to advance some of their next paycheck up to 13 days before payday. Because the Even user is tapping into his or her already accumulated hours, Even doesn’t charge the employee interest on the advance.

Even is one of a handful of technology companies have popped up in recent years looking to get wages to employees faster and on demand. Companies like FlexWage Solutions and Instant Financial offer on-demand pay, but those services are often tied to a debit card issued by the company instead of an employee’s primary bank account.

Even founder Jon Schlossberg has said publicly that part of the company’s mission is to put the payday loan industry out of business, claiming it exploits the financially vulnerable. He shared internal usage data exclusively with The Associated Press that shows, at least preliminarily, that Even users are less likely to tap the payday loan market once they sign up for the company’s services.

“You have this entire industry of financial institutions taking advantage of Americans struggling to live paycheck to paycheck, and payday lenders are really the most predatory,” Schlossberg said.

Payday lenders say they provide a necessary service, with many Americans unable to come up with cash to cover an unexpected financial emergency. They also say they lend to the country’s most desperate, who are often the highest risk for not paying back the loan. But critics say the rates and fees are exorbitant and can trap the borrower in a cycle of debt that can last months. The Consumer Financial Protection Bureau, under the Obama administration, was trying to regulate the payday lending industry nationwide, but under the Trump administration the bureau has begun the process of reversing those regulations.

Even’s data show that roughly 28 percent of its users took out a payday loan in the months before signing up for the service. Four months after signing up for Even, that figure drops to less than 20 percent. Even calculated the figure by studying usage behavior of its members from December 2017 until September 2018.

Even is able to tell which users are still using payday loans because Even users link their bank accounts to the app. The company is then able to tell what types of transactions a user is making, and whether they bear the characteristics of a payday loan transaction or name a payday lender as the other party.

Schlossberg admits that Even could be missing some payday loan transactions, particularly ones where a check is used instead of a direct debit from a borrower’s account. The data is also limited by the fact that Walmart, by far its biggest customer, only started using the product on December 15, 2017. Schlossberg said the company is working with academic researchers on the efficacy of Even’s Instapay product versus payday loan usage, with the goal of publishing sometime in 2019.

Walmart is the only company that publicly says it uses Even, but an Even spokesman says it has “more than” 10 companies signed up currently, with 400,000 active subscribers. Even does charge Walmart employees a $6 monthly fee to use its premium features, which includes Instapay.

Consumer advocates, who have long targeted the payday lending industry, said they were glad to see alternatives to payday loans available but urged caution about their usage.

“The decrease is interesting and potentially promising but too soon to draw any conclusions,” said Scott Astrada, director of federal advocacy at the left-leaning Center for Responsible Lending.