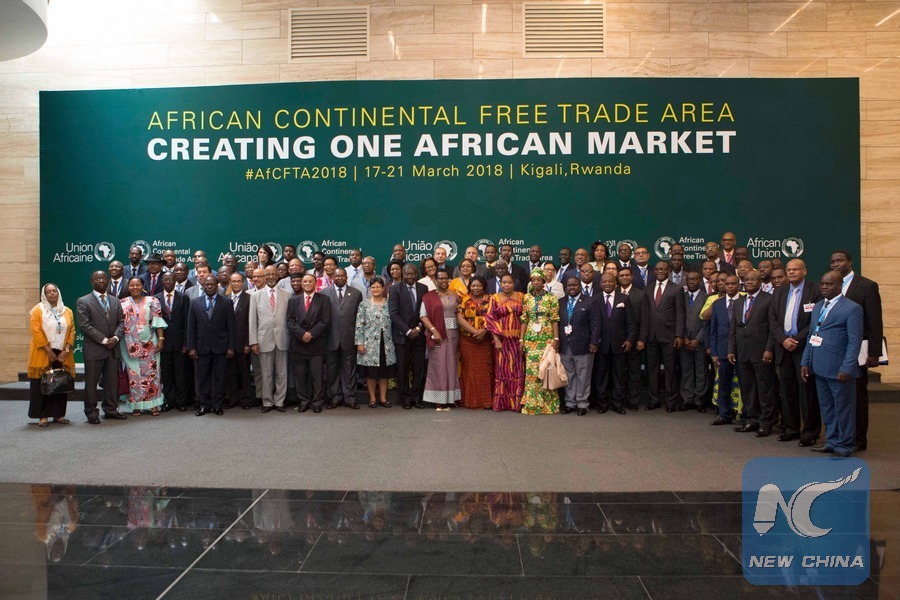 Participants pose for a group photo during a meeting of the Permanent Representatives Committee (PRC) of the African Union (AU) in Kigali, capital of Rwanda, March 17, 2018. (Photo: Xinhua/Gabriel Dusabe)

The signing took place during the 10th Extraordinary Session of the Assembly of the African Union (AU) on the AfCFTA. According the AU, 19 African heads of state and government attended the summit.

The signed legal instruments was handed over to Chairperson of AU Commission Moussa Faki Mahamat after the signing.

The agreement will be submitted for ratification by state parties of the agreement in accordance with their domestic laws.

The decision to form the AfCFTA was adopted in January 2012 during the 18th Ordinary Session of the Assembly of Heads of State and Government of the AU while AfCFTA negotiations were launched by the AU in 2015.

The AfCFTA is aimed at creating a single continental market for goods and services with free movement of businesses and investments. This, according to the AU, will pave the way for accelerating the establishment of the Continental Customs Union and the African Customs Union.

The AfCFTA will make Africa the largest free trade area created in terms of the number of participating countries since the formation of the World Trade Organization, according to the AU. The AfCFTA could create an African market of over 1.2 billion people with a GDP of 2.5 trillion US dollars, the pan-African bloc said.

The AfCFTA will progressively eliminate tariffs on intra-African trade, making it easier for African businesses to trade within the continent and cater to and benefit from the growing African market, said the AU.

The UN Economic Commission for Africa estimates that the AfCFTA has the potential both to boost intra-African trade by 53.2 percent by eliminating import duties, and to double this trade if non-tariff barriers are also reduced.

Together with the signing of the agreement on the AfCFTA, 27 African countries also signed the Protocol to the Treaty establishing the African Economic Community on Wednesday relating to free movement of persons, right of residence and right of establishment.