BUSINESS After an official US equities correction, what's next?

After an official US equities correction, what's next? 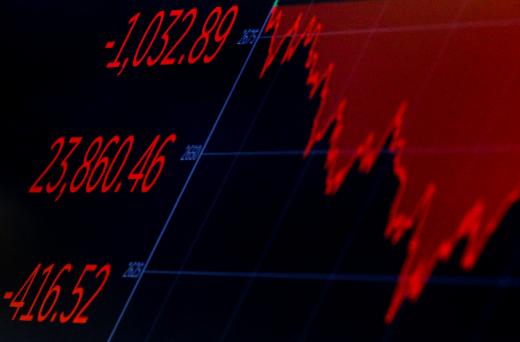 A screen displays the Dow Jones Industrial Average after the closing bell on the floor of the New York Stock Exchange. Reuters photo

The Dow Jones Industrial Average plunged more than 1,000 points Thursday, worsening the week-long sell-off and dragging down the market to an official correction for the first time in two years, as high volatility battered investors' confidence.

Both the Dow and the S&P 500 registered a 10 percent drop from their highs at the close Thursday, indicating a market correction by Wall Street's traditional definition.

All signs showed that the fear of missing out in the ever rising stock market was replaced by the fear of getting out, as investors now are worrying that the bottom is lower than originally expected.

There were no direct catalysts for Thursday's sell-off.

It was widely believed that an upbeat jobs report released by the US Labor Department on Friday last week showing surprisingly fast rising wages gave rise to concerns over rising inflation.

Investors are asking: has the stock market reached the bottom yet and what should they expect for the rest of the year? Market strategists have different opinions.

Bruno Braizinha, US Rates and Global Asset Allocation strategist at Societe Generale, said the chain of causality in the recent sell-off is that global risk sentiment is driven by US equities, US equities are driven by US bond yields that is also affected to a significant degree by core eurozone yields.

What's happening now is "the whole world is trying to normalize policy, and the market is in its negative feedback loop where it will react violently. Global central banks will have to nuance the message a little bit, and then we will find some consolidation."

The Societe Generale's risk premium tools indicated a threshold of 2.70 percent in 10-year Treasuries for the US equity market to start coming under pressure.

Analysts said the market is waiting for central bankers to send a more nuance message but so far little has been delivered. The fear of higher rates is significantly damaging for risk assets.

Braizinha said it is more important for the market to see messages delivered from the European Central Bank than the Fed.

In the medium term, the bank remains cautious for 2018 as extreme positioning, tapering of central bank liquidity and underestimated risks of inflation repricing may continue to exert pressure on risk assets.

Jenny Guan, Founding Partner and Chief Investment Officer at QuantScape Asset Management LLC, said the rally in January and the sell-off in the past week both seem to have broken away from the fundamentals. However, she said as US macro economy and corporate earnings are both on an upward trajectory, US stocks market still looks positive for the whole year.

"There is nothing serious to worry about. The fundamentals of the economies of the United States, West Europe and China are all there and all good... (the Trump) tax cut is not going away," said Peter Costa, president of Empire Executions,Inc.

Costa said he expects a 5-percent increase in the Dow by year end.