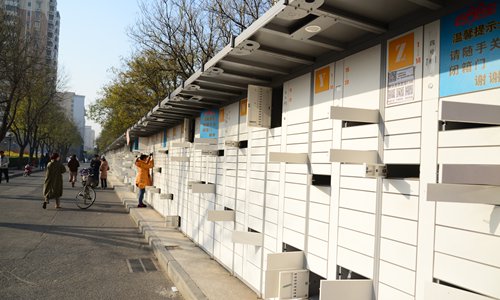 Students collect courier deliveries from cabinets on Friday, which were set up for students and teachers at the University of International Business and Economics in Beijing. (Photo: VCG)

Chinese package delivery company ZTO Express received shipping orders for its 100 millionth parcel as of 11 am on Monday, as the Singles' Day online shopping spree went into full swing.

Last year, it took the company three hours and 40 minutes more to get to the benchmark.

Alibaba's logistics affiliate Cainiao Smart Logistics NetWork shipped its 100 millionth parcel at 8:01 am on Monday, breaking last year's record by 59 minutes. Since 2013, the time needed for reaching that milestone has been reduced by 40 hours, according to the news portal sina.

China's State Post Bureau said in a statement on its website that China's logistics companies have taken on close to 400,000 extra staff ahead of the Singles' Day global shopping festival.

The State Post Bureau expected delivery companies to handle a total of 2.8 billion parcels during the Singles' Day rush between Monday and November 18. Peak single-day shipments could reach 520 million parcels. On a per-capita basis, each courier will have to handle over 240 parcels per day.