Recently, a newly opened unmanned convenience store in Hongqiao central business district of east China’s Shanghai caught people’s attention. While all the goods in the store seem to be not different from that sold in other stores, it is actually a smart store which enables customers to take what they want and then leave without waiting in line to pay. 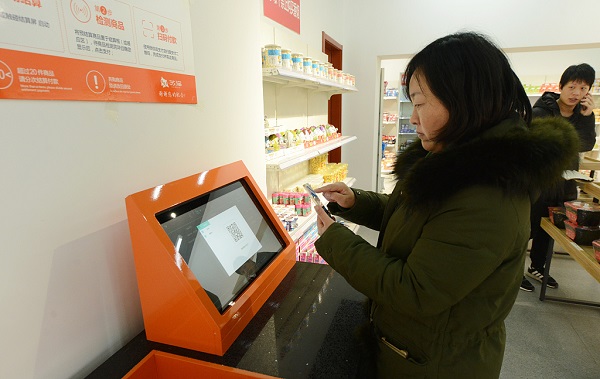 A consumer pays for her items in a unmanned convenience store in Tangshan, Hebei province. (Photo: Xinhua)

Such smart stores, using cameras located on the ceiling and goods shelves to recognize goods and capture the movements of customers, are the creations of the integration of artificial intelligence and new retail which is regarded as an example of data-based reconfiguration of people, goods, and place.

It’s learned that today’s unmanned convenience stores recognize goods mainly using the following three technologies: the bar code, which enables consumers to pay for the goods by scanning the codes on the products, radio frequency identification devices (RFID), which requires sellers to stick RFID tags on each product, and computer vision, which is mainly used at computer vision-based checkout counters and or in sales devices such as intelligent freezers.

With these technologies, as long as consumers open certain apps and set the payment method to password-free payment and scan the dedicated QR code before entering the unmanned store, they can take what they want out of the store directly without paying, and when they walk out, they will receive a message notifying them that their payment has been processed.

We are now in a “new retail reform” centered on consumers, expressed Yang Hai, an executive who was in charge of customer transformation and market strategy of the new retail platform of Tmall.com, China’s leading business-to-consumer (B2C) online retail platform operated by Alibaba Group.

At the age of internet, since traditional retail modes are troubled by difficulties in seeking sustainability, AI technologies have been increasingly winning favor in the retail market in China. Besides unmanned convenience stores, emerging new innovations such as unmanned delivery vehicles, AI customer support have also been launched or envisioned in China.

This past June, China’s e-commerce giant JD.com officially put 20 unmanned vehicles on trial, with the aim of replacing human delivery workers. To ensure safety, all these unmanned vehicles were equipped with radar and sensors, which enable them to monitor the surrounding environment and avoid other vehicles and people on the road and recognize traffic lights.

JD.com has input 10 billion yuan (about $1.45 billion) into its AI base for unmanned vehicles, focusing efforts on the research and development of delivery robots, unmanned aerial vehicles, and unmanned delivery vehicles.

The rapid development of the AI industry has also brought positive changes to the field of AI customer support.

With a utilization ratio of 31.5 percent, AI customer support is at the initial stage in China. Since China’s major internet-based companies like Baidu Inc., Alibaba Group, Tecent Holdings Ltd., and JD.com have all made their plans for the AI customer support realm, the area is expected to be quite promising in the country in the future.