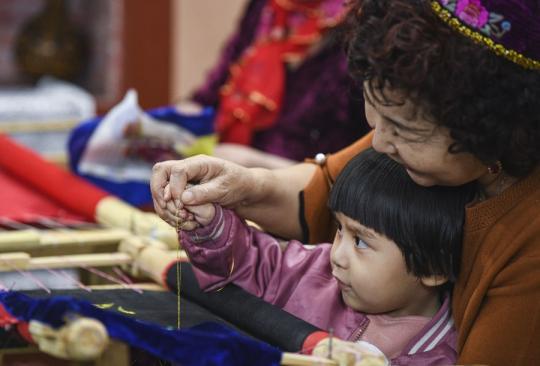 Despite the pandemic, assistance from 19 provinces and municipalities has effectively helped the Xinjiang Uygur autonomous region to boost social and economic development, thereby winning the tough battle against poverty and improving ethnic unity, a senior Party official said.

Wang Yang, a member of the Standing Committee of the Political Bureau of the Communist Party of China Central Committee, called for continued comprehensive, targeted and long-term support to Xinjiang through the "pairing assistance" program, at the eighth national meeting on pairing assistance to Xinjiang. The meeting was held in Aksu, Xinjiang, from Monday to Wednesday.

The program has been implemented in Xinjiang since 1997. In 2010, a new round of "pairing assistance" was launched in the region, involving central and State organs, centrally administered State-owned enterprises and 19 provinces and municipalities.

The program has served as a testament to China's ability to "mobilize resources to solve major problems", a notable advantage of China's socialist system that has helped the country overcome major challenges in the past several decades, Wang said.

During the implementation of the program, assistance providers must ensure that more financial support goes to key projects to improve people's livelihoods and to key areas where help is most needed. In addition, they need to focus on bringing talent support to the region and must help to nurture key industries to achieve the region's sustainable development, he said.

The program, which the central government sees as a major mission, is also expected to enhance exchanges between people from Xinjiang and those from other parts of China, so people can forge close ties and ethnic unity can be further boosted, Wang added.

According to the regional government, more than 80 percent of "pairing assistance" funds since 2010 were invested in areas related to people's livelihoods, such as healthcare, education and employment, to help address the most pressing needs of the people in the region.

Assistance from outside the region played a significant role in lifting more than 3 million rural residents in Xinjiang out of poverty by the end of 2020. Since 2019, the 19 provinces and municipalities have provided 50 billion yuan ($7.73 billion) of financial support to the region while centrally administered State-owned enterprises invested 265 billion yuan in Xinjiang.

Sadikhjan Tash, the owner of a small vegetable oil extraction plant in Shufu county, Kashgar prefecture, was a direct beneficiary of the "pairing assistance "program. In 2020, he and 17 other local entrepreneurs received a total investment of 5.4 million yuan from Guangdong province that was designated to help the county.

With the capital and technical support, Sadikhjan quickly expanded the production capacity of his plant and soon opened a new one. He currently has 48 employees, 70 percent of whom used to be impoverished.

"All my employees have shaken off poverty and are now living a good life. The 'pairing assistance' program has paid off," Sadikhjan said.