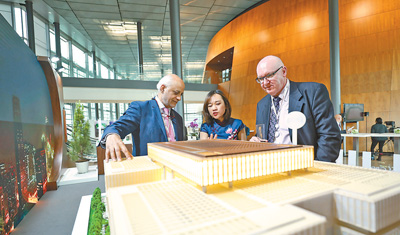 The Asian Infrastructure Investment Bank (AIIB) is a great bank, and it is a pleasure for Rwanda to become a new member of the multilateral organization, said Uzziel Ndagijimana, Rwanda's Minister of Finance and Economic Planning, during the fourth AIIB annual meeting which concluded on July 13 in Luxembourg.

Besides Rwanda, another two African countries, Benin and Djibouti, were also approved to join AIIB during the two-day annual meeting. After the ninth expansion, the total membership will grow to 100, involving both developing and developed countries such as the UK, Canada, France, and Germany.

Africa needs $130-170 billion in annual infrastructure investment, but faces a significant funding gap of $68-108 billion, according to statistics from the African Development Bank.

The AIIB will help the three new members and other African countries to fill this gap and drive their economic development, said Axel Goethals, CEO of the European Institute for Asian Studies, a Brussels-based think tank and policy research center. He added that being a member of the AIIB is a visionary approach that offers opportunities for development.

57 founding members created AIIB as a multilateral development bank focused on boosting development through enhanced infrastructure. In three and a half years, it has established itself in the international community with 100 members in total, according to the president.

The 2019 annual meeting in Luxembourg is the first to be held outside of Asia.

During the opening ceremony, Jin noted the key role that Luxembourg played in the preparation and progress of the AIIB as the founding member and the first European country to join the organization.

Pierre Gramegna, the finance minister of Luxembourg, told People's Daily that they made the right choice to join the AIIB as a founding member. Furthermore, he expressed his hope that more countries will join the multilateral development institution.