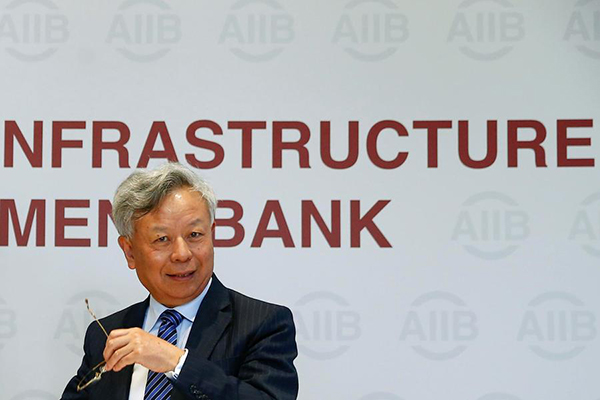 The first group of countries to have this new service could include India, Indonesia and Pakistan, AIIB President Jin Liqun said at a news conference in Beijing on Tuesday.

Using local currency for cross-border financing is a service usually provided by multilateral development organizations to hedge against foreign exchange-rate risks arising from settlement in US dollars. The risk grew when the greenback became stronger against currencies in many emerging economies last year.

Suma Chakrabarti, president of the European bank, said in an earlier interview that the bank is working with the People's Bank of China, the central bank, to develop financing for loans in China in renminbi, given his confidence in the Chinese currency.

AIIB, which provides a multilateral regional financing and investment platform for infrastructure development, decided to expand project investment to $4 billion in 2019 in Asia and elsewhere.

"Recent currency volatility in emerging markets is a cause for concern," said an AIIB report released on Tuesday. "It is likely to lead to delays in projects, weakening the outlook for the project pipeline."

As interest rates are expected to rise in major economies, investors and lenders could start to shift capital back to developed countries. Debt in Asia's emerging markets may become more expensive, the report warned.

Ongoing trade disputes may also have effects on the currencies of countries with higher trade and budget deficits, it said. "Although a full-blown emerging market crisis is likely to be averted, periods of volatility remain likely, accompanied by a slowdown in the global economy in 2019."

"There is an urgent need to redouble efforts to mobilize private capital," said Jangping Thia, principal economist of the AIIB Strategy, Policy and Budget Department.

For China, the next few years will see the growth of private sector financing for infrastructure development, especially with the advance of the private-public partnership financing model, the economist predicted.

AIIB decided to expand its membership to 93 by the end of last year, adding five more African countries in December.