Airbus faces a logjam of undelivered A330 jets worth well over $1 billion for airlines affiliated to China's debt-laden HNA Group following a stand-off over late payments, according to industry sources and a Reuters examination of parked aircraft. 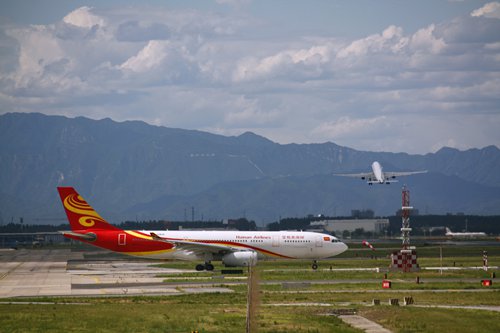 An A330 of Hainan Airlines prepares for take-off at Beijing Capital International Airport. (Photos: VCG)

Companies belonging to the troubled Chinese aviation-to-finance conglomerate have delayed payments for several months, leading Airbus to withdraw deliveries rather than step in to finance the aircraft itself, the sources told Reuters.

"After six months of talks, Airbus took the decision to withdraw the planes as it does not want to play the financier," said a person familiar with the discussions on Wednesday.

However, another person involved in the matter cautioned: "It is in the process of being resolved."

"We keep our talks and contractual terms with customers confidential," an Airbus spokesperson said.

The cluster of undelivered A330 aircraft came to light on the sidelines of a ceremony to present Airbus' smallest new jet.

Reuters journalists counted five A330s dotted around the delivery center and another parked further away - some with reflective sunshade protectors taped to the cockpit windows and all painted in the flame-red liveries of HNA Group airlines.

Various semi-finished A320s could be seen parked, though it was impossible to tell whether these were grounded for the same reasons or because of a wider problem of engine shortages for such planes.

Airbus has had a stockpile of up to 100 undelivered single-aisle jets, but said last week this had fallen to 86.

The wide-body A330 aircraft has no such engine supply problems and it is the backlog of those more expensive planes that is causing the most concern, the sources said.

An aircraft finance source estimated the total financial burden of holding such an asset, in terms of lost value and the cost of storage and maintenance, at $10,000 per plane per day.

Airbus is already having to handle cash shortfalls from the late delivery of dozens of A320 aircraft.

Unraveling the situation could be made more difficult by the death last week of HNA Group's chairman Wang Jian, a financial source said, though HNA quickly named co-founder Chen Feng as sole chairman of the group.

Wang, regarded as the architect of HNA's $50 billion acquisition spree that pushed it into debt, died in southern France on July 3 in what local police said appeared to be an accidental fall from a wall while posing for a photograph.

His death complicates the troubled conglomerate's efforts to restructure and pay off borrowings.

"Anything like this creates turbulence, so things are difficult with HNA," the financial source said. Another industry source stressed Chen was nonetheless a heavyweight figure.

Financial sources said earlier this year that some airlines linked to HNA were delaying aircraft lease payments to lessors.

Some of the sources said HNA's flagship Hainan Airlines and smaller ones including Lucky Air and Beijing Capital Airlines had missed payments, while Tianjin Airlines was seeking to extend the term for payments due this year.