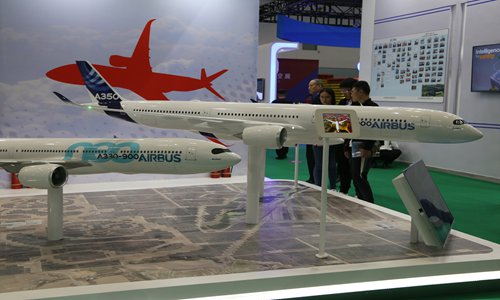 Visitors look at models of Airbus aircraft at the Aviation Expo China 2019 in Beijing on Wednesday. (Photo: VCG)

France-based aircraft maker Airbus has seen fast growth in its business in the Chinese market over the past several decades, thanks to the country's reform and opening-up policies and rapid economic growth, and the company is eyeing more opportunities as the market continues to expand, Airbus said on Wednesday.

China is the largest single market for Airbus in terms of fleet size, and the number of aircraft delivered by Airbus to China each year accounts for nearly one-quarter of global deliveries, Airbus said on Wednesday.

Airbus has delivered 93 aircraft to customers in the Chinese mainland this year, and its market share for wide-body aircraft in China is more than 60 percent.

As of the end of July, the total number of active Airbus civilian aircraft in the mainland reached 1,779.

"Airbus's market share in China has increased from 9 percent to 50 percent over a period of 20 years, due to the reform and opening-up of China and our cooperation with the Chinese aviation industry," Xu Gang, Airbus China CEO, said in a note sent to the Global Times.

Cooperation between Airbus and China began in 1985. By 2018, Airbus's investment in China's industrial cooperation sector had exceeded $900 million. By 2020, this figure will reach or exceed $1 billion per year, Xu said.

"China for Airbus is not only an important market, it is also a long-term cooperation partner," he said.

Airbus' gain is in line with the development of China's aviation market.

Data from the Civil Aviation Administration of China showed that the nation's civil aviation industry carried 442 million passengers in the first eight months of this year, an increase of 8.7 percent year-on-year.

Boeing said on Tuesday that China will exceed the US to be the largest aviation market in five years, and forecast that Chinese carriers will need 8,090 new airplanes in the next 20 years, worth nearly $1.3 trillion.

It also forecast that about $1.6 trillion in services will be necessary to meet air passenger traffic demand in China, which is expected to grow by 6 percent annually.

China has 15 percent of the world's commercial airplane fleet. By 2038, that number is expected to increase to 18 percent, putting China on pace to become the world's largest aviation market within the next decade.