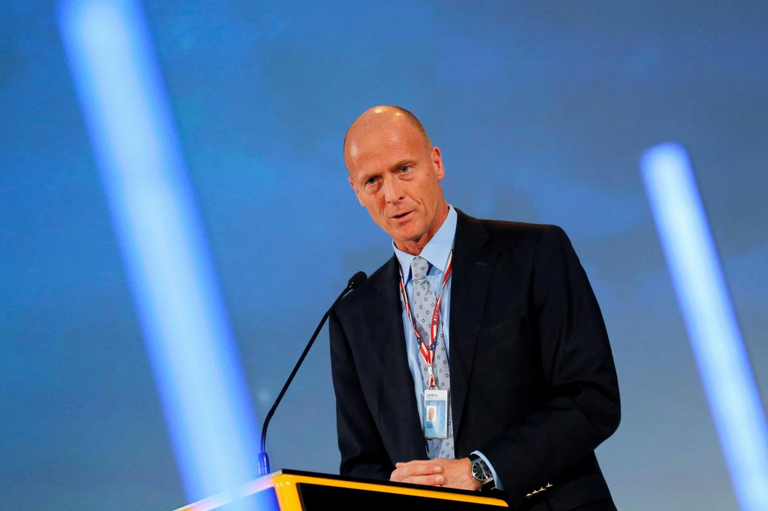 Airbus Chief Executive Tom Enders attends a ceremony during the delivery of the new Airbus A380 aircraft to Singapore Airlines at the French headquarters of aircraft company Airbus in Colomiers near Toulouse, France, December 13, 2017. REUTERS/Regis Duvignau

Airbus (AIR.PA) is engulfed in a fresh bout of speculation over the future of senior managers as corruption probes rattle the aerospace company and add fuel to a long-running clash of egos at the top, people familiar with the group said.

Board directors meeting on Thursday are seeking to contain damage from multiple international fraud investigations over commercial and military sales, while getting a grip on what could become a chain reaction of departures, insiders said.

“You can’t rule out a change of governance before the end of the year,” a senior source close to the company said.

Others are more cautious, pointing to 2018 as the pivotal period for a company enjoying a record share price but struggling to maintain its sales position against rival Boeing.

So far, investors have been sanguine about the impact of investigations and a loss of sales momentum, but coupled with senior retirements, the sense of uncertainty is deepening.

“You won’t recognize the company within 12-18 months,” a person who deals closely with Airbus said.

Chief Executive Tom Enders has indicated he will not stay beyond his current term which ends in 2019, Le Figaro reported on Tuesday, reversing a position taken in April.

Enders, who is seen as increasingly isolated after losing a top aide last week and facing a backlash over compliance reforms, has said his future is up to him and the board.

“Reports of my demise are premature and exaggerated,” he told Reuters on the sidelines of an aircraft delivery ceremony in Toulouse on Wednesday.

In a move first reported by Reuters in October, the board has appointed head-hunters to examine fresh options for top posts, though the company insists this is a normal planning exercise.

‘WHO GOES AND IN WHAT ORDER?’

Industry sources have said Enders is expected to give up on a third term for a mixture of personal reasons and a recognition the board is looking for a fresh start to ease the chances of a settlement of corruption allegations.

The more pressing question, some company watchers say, is whether Enders will complete his current mandate and stay through 2018.

Enders, who turns 59 this month, has said he is focused solely on his 2019 mandate. He recently won the board’s backing amid a flurry of negative press reports.

That in turn has raised speculation whether his deputy and long-time internal rival Fabrice Bregier will ride out the storm and fulfill a long-held ambition to succeed Enders.

Only a handful of people expect Bregier, who is in charge of delivering on a record order backlog that underpins the share price, to stay for long if it becomes clear he is no longer Enders’ automatic heir.

He has been occasionally linked with energy firm Engie (ENGIE.PA). But so far he has appeared strongly committed to Airbus and one person who has known both executives for years said Bregier was still expected to succeed Enders.

Festering animosity between the two boiled over earlier this year in a row over who should control the powerful jet sales department - a spat first disclosed by Reuters.

The two are now locked in a battle for survival which could leave both of them vulnerable, insiders said.

Both have told visitors they expect the other to go, but sources disagree whether Enders is maneuvering for Bregier’s early departure as their power battle intensifies.

“The question is who goes and in what order,” a source close to the company said.

A person close to Enders denied speculation of a management crisis, adding “we are taking all the necessary decisions, the company is running well, we are active in the (aircraft) market and we are delivering on our targets.”

Succession plans and operational priorities will be discussed by the board on Thursday, but a source familiar with the agenda said it would not likely be a decisive session.