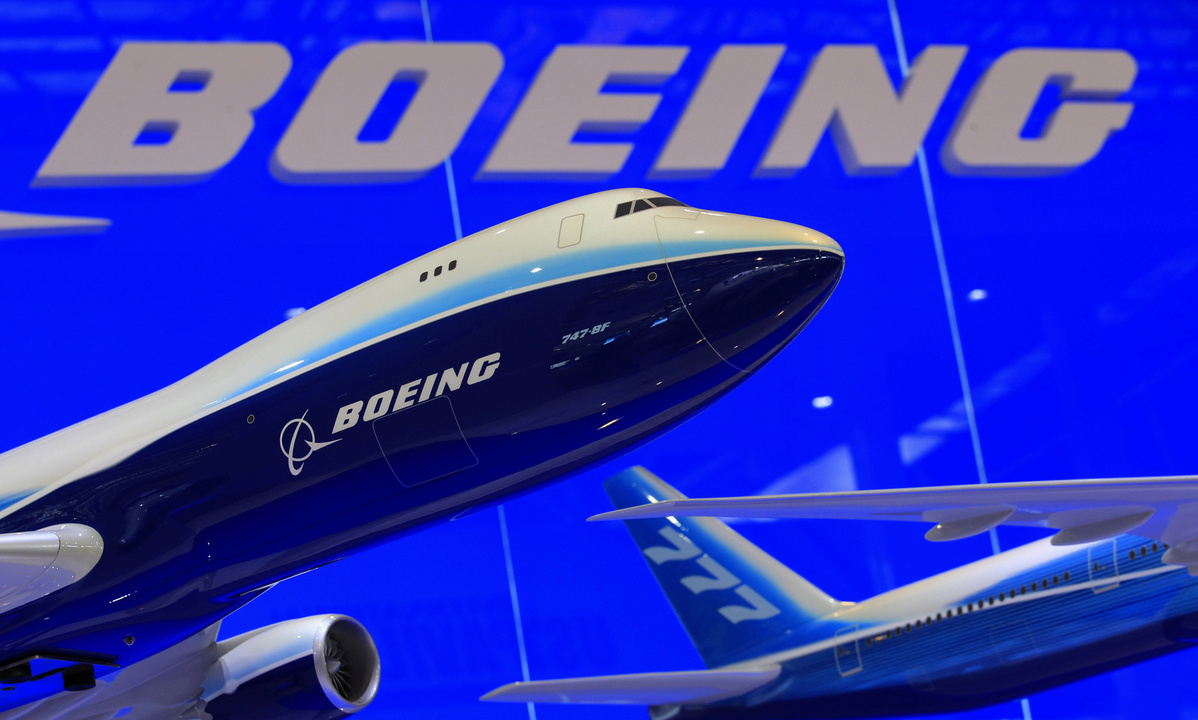 Models of Boeing 747 and 777 passenger planes are displayed at the Boeing booth as part of the China International Aviation & Aerospace Exhibition in the southern Chinese city of Zhuhai November 12, 2012. (Photo: Agencies)

Boeing Co has further raised its forecast for the demand of aircraft in China. Over the next 20 years, Chinese carriers are expected to acquire 8,600 new airplanes valued at $1.4 trillion, fueled by a robust recovery following the COVID-19 pandemic, the US aircraft manufacturer said on Thursday in Beijing.

Despite the challenges imposed by the pandemic, China's projected airplane and services market represents a nearly 7 percent increase over last year's 20-year forecast, with a large replacement cycle as China's fleet matures.

China will have a continued high demand of single-aisle airplanes and need 6,450 single-aisle aircraft by 2039. Also, 1,590 wide-body aircraft are expected to be delivered to Chinese carriers in the next 20 years. With slower recovery of long-haul international routes, the demand for wide-body planes is 4 percent down from last year's forecast, Boeing said.

"Not only has China's recovery from COVID-19 outpaced the rest of the world, but also continued government investments toward improving and expanding its transportation infrastructure, large regional traffic flows, and a flourishing domestic market mean this region of the world will thrive," he said.

China's domestic air travel market is steadily picking up, with the number of scheduled flights in the domestic market reaching about 80 percent of the level recorded last year, according to the Civil Aviation Administration of China.

In comparison, the number of commercial flights operated globally has been cut to about half of the level seen last year, and passenger volume is about 25 percent compared with a year earlier. Global air travel market could return to the level seen in 2019 in about three years, Boeing said.

China's rapidly growing middle-class consumers, increased economic growth and growing urbanization are all factors that contribute to the positive forecast. Since 2000, China's commercial jet fleet has expanded sevenfold, and approximately 25 percent of all aviation growth worldwide in the past decade has come from China.

Boeing forecasts this trend will continue over the next 20 years. By 2039, the fleet size in China will account for 20 percent of the total world wide, and other countries in the Asia Pacific region will make up for 21 percent of the total, Boeing predicted.

In addition, Boeing said China would need a significant number of freighters, with a large part of them converted from commercial aircraft. The demand is partly driven by the rapid growth of e-commerce and air express shipping.

Meanwhile, Boeing said the B737 MAX, which has been grounded worldwide after two fatal crashes, has no specific timetable to resume flying, and the final decision will depend on the US Federal Aviation Administration.

Currently, China stands as the largest and an important strategic market for Boeing and its European rival, Airbus.

"About one-fourth of global single-aisle aircraft was delivered to Chinese carriers. For aircraft manufacturing, it is critical to grasp the growth opportunity in China," said Lin Zhijie, an aviation industry analyst and a columnist at Carnoc, one of the largest civil aviation websites.

"With a steadily recovering domestic air travel market, aircraft delivery in China is on track to resume to a regular level," he said.