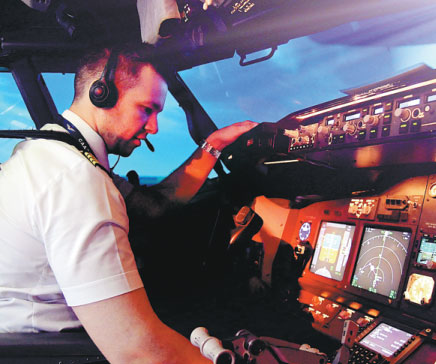 For Peter Barbagallo, it was a major decision to move to Shanghai with his family to join China Eastern Airlines two years ago. Now, he said he is very proud of being a foreign pilot with the airline, and plans to live in Shanghai for as long as possible.

Coming from Brisbane in Australia, Barbagallo said there are a lot of differences working with the Shanghai-based carrier compared with his previous airlines in the Middle East.

"My local colleagues are friendlier, more welcoming, collaborative and inclusive ... We are like a family here. I am not a staff member ...I am Peter Barbagallo," said the 37-year-old pilot who currently flies between 70 and 80 hours a month. Most of his flights are domestic ones.

He said all the staff members look after each other, and that the environment is more personal, happy and relaxed here.

Barbagallo is one of some 70 foreign pilots working for the airline. According to Cai Hui, deputy general manager with the airline's Shanghai flight department, the foreign pilots come from 18 countries, including Brazil, Italy, Netherlands, the United States, France, Canada, Philippines, Singapore and Mongolia.

"Most of them are flying large wide-body aircraft including A330 and B777 for long haul international routes," Cai said. "In addition to their advantage with languages, foreign pilots are more familiar with the airspace, airports and flight environment of their own countries, which is another advantage when flying routes to and from their countries."

In the past few years, China Eastern has been exploring building a foreign pilot team of high quality. At the same time, the carrier is actively expanding its overseas team by employing more than 1,700 foreign staff members in 33 countries and regions.

As part of its efforts in building a "silk road" in the air, China Eastern has launched 126 flights to 42 cities in 19 countries involved in the Belt and Road Initiative. Last year more than 6 million passenger trips were made by the carrier to countries and regions related to the initiative.

"The addition of foreign pilots has made China Eastern more diversified and internationalized, and it also encouraged our management and operations to quickly adapt to world class standards," Cai said.

Barbagallo's first job was flying a small airplane in Australia. He also had to work part time in a bar "pulling the beers" to earn enough money.

He believes the Chinese aviation industry is limitless as it has great potential for growth, the best technologies and tools, as well as continuous orders for new airplanes.

In the past two years, Barbagallo has been impressed by the Civil Aviation Administration of China and China Eastern's high level of professionalism, focus, and standards on safety. Flight efficiency has noticeably improved since he started working for China Eastern in June 2017.

Ever since he was a little boy, Barbagallo dreamed of becoming a pilot like his father. He got a private flying license at the age of 15, finished his commercial license in 2002 and started to fly small airplanes thereafter.

"I always wanted to do what my father did. Honestly speaking, I couldn't tell you what I would do if I wasn't a pilot. It's been part of my life for so long now," said Barbagallo, adding that his job is both satisfying and rewarding.

As the father of a 4-year-old girl and a 3-year-old boy, Barbagallo decided to expose his children to an international environment and help them master a second language.

"I think Mandarin is a very important language for them," he said. "If they can be fluent in a second language like Chinese, I think that will be an amazing advantage for them, for their prospects and for their careers."