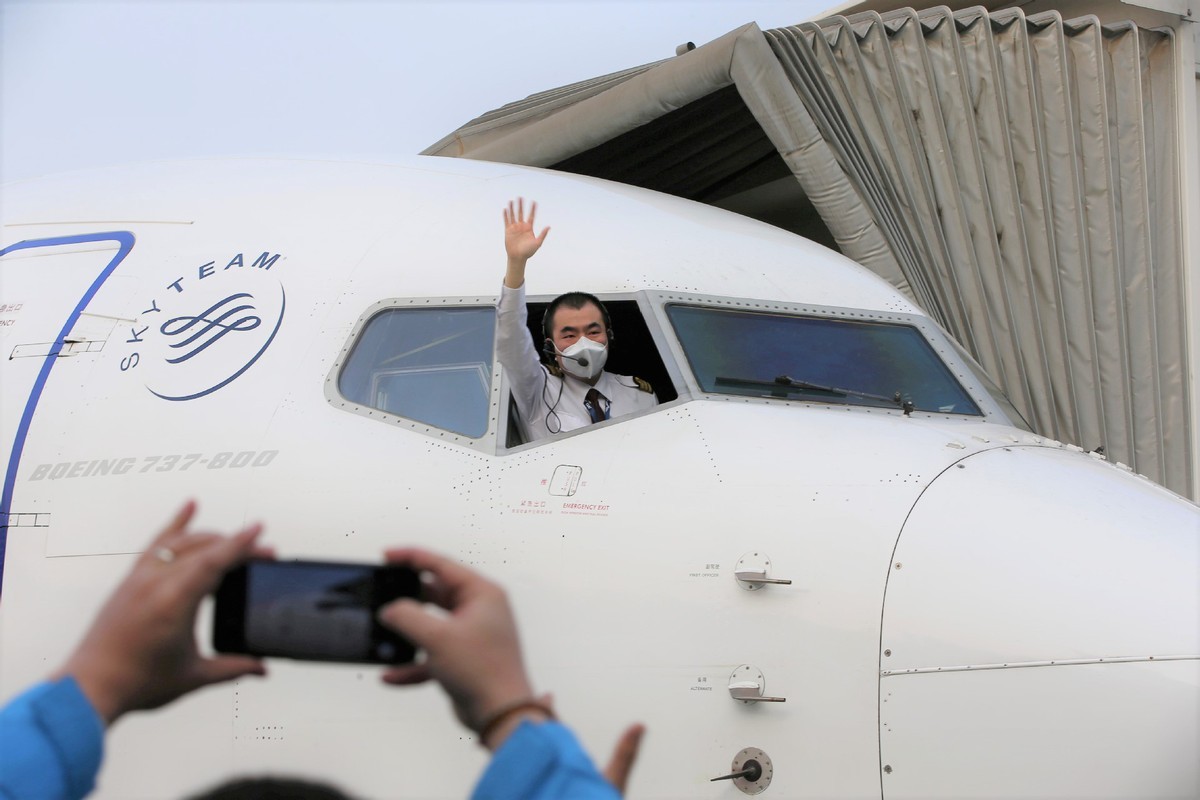 A pilot leans out of the cockpit window to wave goodbye before the China Eastern Airlines flight, the first domestic flight from Wuhan that resumed service after travel restrictions to leave the capital of Hubei province were lifted, takes off from Wuhan Tianhe International Airport to Sanya, on April 8, 2020. [Photo/China Daily]

Domestic airlines in China rolled out ticket discount packages under the banner of "fly at will" one after another recently, in the hope of recouping money and boosting consumption affected by COVID-19 outbreak.

These packages priced at around 3,000 yuan ($424.59) allow passengers to book a domestic flight (except for Hong Kong, Macao and Taiwan) for free and without limitation of time slot and number of journeys in a given period of time.

China Eastern Airlines, the first air carrier that launched "fly at will" weekend package said, as of June 24, more than 100,000 tickets had been bought by package buyers, most of which were for the Duanwu Festival holidays from June 25 to 27 or for weekends in July. The package of China Eastern Airlines will be valid until the end of the year. According to Paper.cn, the weekend package saw explosive sales as soon as it was introduced on the app on June 18.

China Express launched a similar "fly at will" ticket package on June 23, five days after the China Eastern Airlines', according to its Weibo account. Although the validity period from June 28 to Oct 24 (except for Sept 28 to Oct 10) is shorter, the "fly at will" of China Express allows passengers to take weekdays' flights. However, only medical workers and new clients of the carrier are qualified to purchase such tickets. China Express said on its Weibo account that it saw the package as a "testing waters" but it had gave the airlines a 3 million yuan cashflow.

Following the moves, Hainan Airlines announced its version of "fly at will" on July 1. The package will be valid from July 20 to Dec 31 (except for Sept 30 to Oct 8) and open to children of age below 12, eyeing to expand potential customers. Additionally, a package user will be given 2,880 yuan worth of shopping vouchers for duty-free shops of China Duty Free in Hainan.

According to the Civil Administration of Aviation, the country saw 935,200 passengers and 10,570 flights daily in early June, recovering to 57.4 percent and 66.11 percent over the same period of last year.