Chinese carriers are taking various measures to overcome the difficulties posed by the novel coronavirus outbreak, promoting destinations and selling tickets through livestreaming sessions as part of the latest ways for them to get through the challenging time. 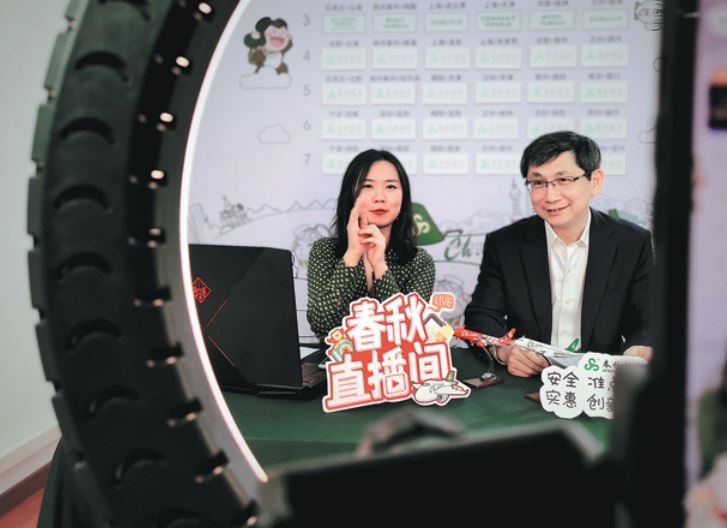 Behind their new move is a multi-billion dollar livestreaming market in the country, where Chinese consumers are increasingly enticed to open their wallets through the promotion of various goods and services in livestreaming events.

In early May, five flight attendants from Tianjin Airlines and two local tour guides showed the beautiful scenery of the Xinjiang Uygur autonomous region through a three-day livestreaming broadcast.

During the sessions, the flight attendants helped introduce local sightseeing, sold local agricultural products, and offered discounted flight tickets within the region that were as cheap as 150 yuan ($21) per one-way flight. The company also introduced some of the latest travel information and policies in front of the webcam.

It was the second livestreaming session held by Tianjin Airlines, and the carrier plans to hold a third such session in June.

"Nothing can prevent the pursuit of travel in the heart of Chinese consumers. The tourism sector is gradually picking up as the epidemic is getting under better control in the country. Tianjin Airlines aims to provide more diversified travel experiences to passengers and help reboot the growth of the sector," said Wang Jieming, sales and marketing department manager of Tianjin Airlines.

Aviation industry analyst Lin Zhijie said it is natural for airlines to turn to livestreaming in this difficult time. In fact, it is suitable for carriers to promote their products through livestreaming and there appears to be considerable growth potential in doing so.

"When viewing attractive sceneries such as beaches and ancient cities online, it may inspire viewers' interest to go traveling, and thus stimulate their demand for flight ticket purchases," Lin explained.

"Flight tickets have low marginal costs. By livestreaming communications, it is easy to target the demand of passengers accurately and sell tickets with small profits and large volumes," Lin said.

He added though that for flight ticket sales, it is still kind of difficult to perfectly showcase the services and values during a livestreaming session. There is also no outstanding difference between different carriers.

In late April, Spring Airlines President Wang Yu became the first executive anchor among domestic carriers for a livestreaming session. The session attracted a viewing audience of more than 8 million. During the program, he introduced new flights that Spring plans to launch, and gave away complimentary flight tickets and hotel coupons through lucky draws.

The air travel market started its summer and fall flying season in China on May 3. Since then, Spring has restarted and launched 47 domestic routes, including short-haul flights in the Yangtze River Delta region. It said the decline of jet fuel prices in China since May will support carriers so they can launch more such short-haul flights.

As the contagion continues to rage globally, each Chinese carrier is allowed to have one international flight to one country per week, according to the requirements of the Civil Aviation Administration of China. As a result, Chinese carriers are shifting their spare capacity to domestic flights.

"By taking a flight between Shanghai and a city in nearby Jiangsu province, it will cut the trip to one hour, reduce contact between passengers in boarding buses and trains, and help with epidemic prevention and control," said Zhang Wu'an, a spokesman of Spring Airlines.

Spring, the first domestic carrier to join the livestreaming sector, said it introduced the brand and new flights earlier and has become closer to passengers. It may try to sell more flight tickets through livestreaming sessions going forward.